The Witcher's timeline yanked into order. 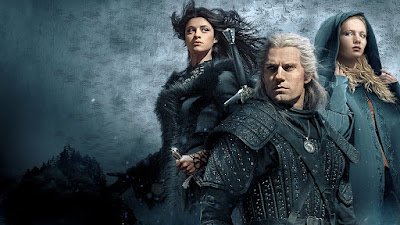 The Netflix adaptation of   Andrzej Sapkowski's Witcher has been a triumph but has left many viewers confused by its non-linear storytelling, and I must confess to being a little puzzled myself until I realised that the time-line of the individual episodes were all over the place. As soon as I realised that fact my enjoyment of the series increased. And when I watched the eight episode run for a second time I came to the conclusion that this is truly a masterpiece of the binge era. It makes the most of the possibilities of this new way of broadcasting.

If this show had been shown in the old school way - that's an episode every week then I feel it would have fallen flat on its face; that no matter how good it is the confusions from week to week would have been too much and viewers would have fallen away. But in the modern era where entire seasons are dropped at once, and the viewer can control how much to consume in a single sitting then it works fine. In fact this non-linear device may have actually made the viewing experience more rewarding since total attention was required from the viewer. 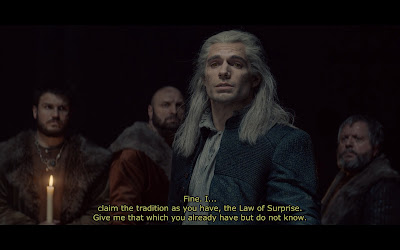 So to break down the way the series works is that there are three main characters Geralt, Cirilla and Yennifir - now each of these characters stories are told in different timelines, and according to the showrunners Geralt's particular arc in the first season covers around 20 years, while Cirilla's is only about two weeks. And Yennefer's arc actually covers a massive 70 years.

Confused??? Well, watch the show and it will all make sense. But if you don't mind spoilers then below I have tried to outline the way the stories work in the eight part series. At least, this is the way I see it.

The first episode seems to largely take place during the present time, two weeks before Geralt and Cirilla meet and ride off into the sunset and season two. In this episode Cintra is under attack from Nilfgarrd and we will witness the fall and Cirilla being spirited away before the hordes over-run the castle. We learn that she is to find Geralt of Rivea. The sequences involving Geralt in the episode are taking place in the past, before Cirilla is even born, and depicts one of the coolest sword fights ever filmed.


Epidsode 2 - is the distant past and this pretty much gives us Yeneffir's origin story - of how she was a hunchback girl sold by her own father. We disover that she has been sold to a sorceress and will be trained in the ways of magic. The sequences with Geralt take place some time after Yeneffir's events in this story but before those sequences involving Cirilla which are again in the present. The sequence involving Geralt are taking place after Yeneffir's section but before the Cirilla sequence - we learn how Geralt first meets the bard, Jaskier. This episode forms the basis for Jakier's Witcher ballad.

Episode 3 - Again in the distant past, Yennifir's twisted body is transformed but although this makes her a beautiful women we will discover that it leaves her unable to bear children. Geralt's sequence is also in the past though much latter than Yennifir's sequence, whilst once again the events surrounding Cirilla are present day.


Episode 4 - Yennifir has now been serving the kingdom of Aedirn for three decades
. Geralt's sequence is vitally important here and we witness him at the betrothal feast of Princess Pavetta of Cintra.  The princess will turn out to be Cirilla's mother and it is events in this sequence that ties Geralt's destiny to Cirilla,

Episode 5 brings Geralt and Yennifir together in events that take place a few years after the events told in the previous episode, while Cirilla's adventures still play out in the present day.

Episode 6 - Geralt and Yennifir meet again during a dragon hunt - at this point Geralt and Jaskier have been together for many years. We learn in this episode that it was Geralt's last wish that bound him and Yennifer together. When Yeniffir discovers this she is furious and mocks Geralt for not claiming his prize for the law of surprise (an event explained in the previous episode) and leaves him.

Episode 7 - Geralt arrives in Cintra shortly before the events we witnessed in the first episode, He has come to claim his reward for the law of surprise, but instead Queen Celanthe imprisons him. When it becomes clear that Cintra is about to fall (remember episode 1) the Queen decides to give Cirilla to Geralt to keep her safe but Geralt's already escaped.

Destiny will bring them together.

Episode 8 - all of the stories in this episode take place in the present day and finally bring Geralt and Cirilla together. Geralt spends much of the episode in a feverish dream after being injured saving a farmer from a brilliantly executed zombie attack. The farmer takes the feverish Geralt to him home where Cirilla is already being cared for by the man's wife.

Least, that's how I think it all worked. 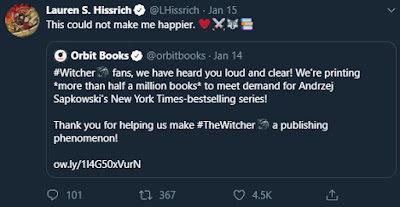 The first season was based on the book, The Last Wish, which is actually a collection of short stories set in the Witcher universe, that  take place before the events told in the actual first Witcher novel, Blood of the Elves. It was these stories that formed the basis for the first season of the Netflix show. It was a good way of doing it because had the showrunners started with the first Witcher novel then all of this backstory would have had to have been woven into the story, and I, and many viewers judging by the ratings and praise for the series, really enjoyed this series, confusions timeline and all. According to tweets from the showrunners, particularly Lauren S Hissrich who has really connected with the fans, tell us that the second season will feature a much more conventional storytelling style. This will please many but as long as they keep up the brilliance.

At the time of writing, The Witcher is officially the biggest TV show in the world.