The Next Victim by Helen H. Durrant: Book Review 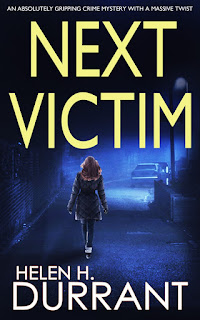 This book, the first to feature DCI Rachel King, hits the ground running by given us the killer's point of view quite early in the narrative while opening up the world  the characters inhabit around the tightly constructed plot. Of course the nucleus of the story is the life of Detective Rachel King, late Thirties, divorced (fictional lead detectives usually are), two teenage children and an hectic work and home life balance. Add to this the fact that Rachel is still very much in love with (even if she doesn't want to admit it to herself) an old flame who just happens to be a notorious gangster, and you have a heady mix indeed.

This last element added a lot to the character of Rachel and promises much for later books in the series. It really is an intriguing aspect to the premise and when Rachel and Mr gangster team up towards the end of the book this offers an original twist on that old chestnut; the ill-matched pair. It's more Hart to Corleone than Hart to Hart. Although joking aside, this part of the plot works really well, is handled with panache and seems perfectly natural to the story that the author tells. In fact, it left me eager to get into the second book in the series and find where this relationship will go next.

A young man’s body is found burnt and tortured by a Manchester canal.Detective Rachel King investigates. But she has a secret, the love of her life is a well-known villain. He has recently come back on the scene. But what does he really want?A brutal serial killer with a taste for good-looking young blonde men.A student who believes she has a lost brother. But even her own father doesn’t believe her.

The Next Victim is one of those books that grips the reader very early on and I found myself rooting for the main character and becoming invested in her messier than messy private life, while she tried to juggle a heavy work load and stop a serial killer. All of the characters ring true and the pacing of the story is faultless with events happening naturally in the narrative and carrying the reader hurtling towards the final denouncement with that twist, that to be honest I'd figured out by the last quarter of the story but nevertheless kept me enthralled.

Posted by Gary Dobbs/Jack Martin at 01:02