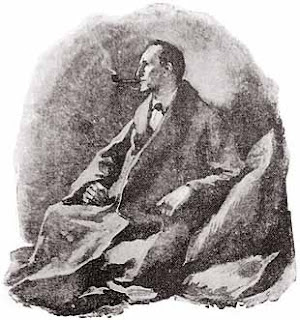 I caught an old Study in Scarlet on the TV this morning with Peter Cushing as Holmes and it got me to thinking about the great detective.

Now I'm far from a Holmes expert but I'm certainly no layman either. I became hooked as a kid from the Basil Rathbone movies they used to show on BBC2 and I remember my English teacher encouraging me to read the short story collection in the school library after I asked about the character.

Holmes and Doyle are well represented on the interweb and the character is worth discovering anew - you may, like I did, learn new things about him that gives an whole new appreciation of the canon.

Holmes may have not been the first real fictional detective character, that award probably goes to Edgar Allen Poe but Baker Street's consulting detective was certainly the first superstar fictional detective. And after all these years Holmes still sits at the top of the list - such is the success of the character in popular culture that there are people who still think he really existed.

The best place to start looking for information is The Sherlock Holmes Net which is a true labour of love and hold countless links - even one that takes you to the original stories.
Posted by Gary Dobbs/Jack Martin at 05:18