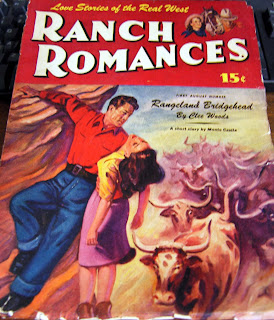 Subtitled: Love stories of the Real West, Ranch Romances was a pulp western magazine that was published by Warner publications of Chicago. It was a long running magazine and this issue is number 4 in volume 120. The cover price is 15c (I paid £12 for it) and it's in very good condition for a pulp of this age. There were also British editions of the magazine and these are fairly easy to find but this is an original American issue.

It contains 7 stories, one of which is a novel, another a novelette and the rest are short stories. The novel is this issue, which boasts the cover image, is Rangeland Bridgehead by Clee Woods. 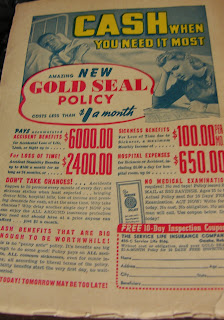 and in need of protection. They also have a habit of fainting clean away at the first sign of trouble - maybe there were a few male writers among those female pen names.

One of the things I always enjoy about the old pulps is the letters page - readers could always be relied upon to send off a note to the editor and not always in praise of the respective magazine. The letter page is this issue though is largely given over to pleas for pen pals.

A 17 year old boy from Marietta, Miss, who lists his interests as riding his bike, collecting stamps and sports want to correspond with people, of either sex with as view to friendship.

Maybe he should have gotten in touch with Delores from Wishek, who is 15 years old with long blond hair and blue eyes. She likes skating and dancing and is looking for loads of letters from pen pals out there. There's a poem entitled Cowboy Sergeant from Sam Allen Cofer from Texas and another from Juanita Penningtom of Hamilton entitled Cowboy in Khaki and is a touching poem that tells of how she misses her cowboy now that he's serving in the army. Remember the magazine was published during the penultimate year of World War II. Another poem tells of the author's desire to become a cowgirl.

The AD's are also fascinating with companies making claims about their product that are often outrageous and sometimes hilarious. Radio was a big thing at the time and several adverts are offering the reader the chance to become a radio expert and make big big money.

"Shortages in trained, skilled men (apparently women were too busy in the kitchen!) run into the hundreds of thousands. Wartime demand for radio experts is tremendous - so train now with National Schools of California."

The Charles Atlas AD is present and correct though what it is doing in a magazine with a primarily female readership is beyond me. There's also details of a course that will turn you into a fingerprint expert so you can go into the exciting world of law enforcement. 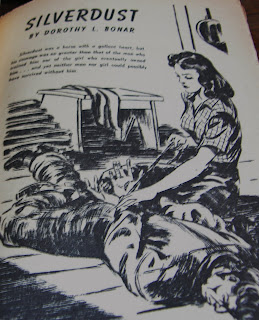 Then we've got AD's for the treatment of piles - Page's Palliative Pile Preparations - you'll bless the day you read this. Another AD offers several volumes of cowboy songs which will make you Sign like a Cowboy and The Richard Brothers of Chicago are asking for Poems to be used in a musical setting. The Newell Company have a new technique that they claim will guarantee you stop smoking, Pulvex flea powder is apparently the favourite among dog owners, Crown Dental are offering a free sample of their plate reliner that will tighten your false teeth and half a dozen other AD's are offering further cou 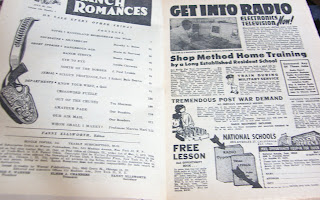 All in all another great addition to the Archive.
at August 20, 2009

The pulps were a kick, weren't they! I think that's where I got into the habit of reading ads, which to most people is boring. As a teenager in the '40's I used to go looking for pen pals in those ads, but, as I recall, I never received one response from my few pleas. I hope my writing has improved a little.

Back in the early days of Trek fandom I found an ST pen pal through a zine. It lasted as long as one letter when she dissed me because I also expressed an appreciation for "Lost in Space." So much for budding romance.

You should have told me you wanted a Ranch Romances. I would have shipped one to you for free. They actually aren't considered one of the most highly sought after of pulps when it comes to a collector's standpoint, maybe because they were around for so long. I believe they stopped operations in 1971.

Lots of good writing in RANCH ROMANCES, often by the same writers who were contributing heavily to the other Western pulps. I'm especially fond of the issues from the Thirties.

I enjoyed my one copy of Ranch Romances I own. Terrific stories.

Laurie, did the most recent Ranch Romances (of the '60's and '70's) begin to more resemble True Confession style romance mags, or did they stay more unique and true to western pulp roots?

Don't know, Richard, because I haven't read any from the 60s and 70s. The only ones I have are from the 30s. Good question, tho.

I can answer that one, having seen a number of those issues. They stayed pulp-sized until near the end in 1971 (there may have been a few digest-sized issues, I don't recall) and printed the same sort of fiction they did all along. In fact, at some point in the late Sixties, the magazine changed its title to RANCH ROMANCES AND ADVENTURES and became mostly a reprint magazine. I think by the end it was all-reprint. I remember seeing new copies of those later issues on the newsstands and wish I had bought some.

It's great to have so many comments - just shows how loved the old pulps are.

Charles Atlas's course is also used by women so why not have an ad in these magazines. Check out their website at www.charlesatlas.com

could this possibly from the same Bob Allen that did some ranch romances and all western and ace high magazines
I wish i could find the true artist. this is presumed to be from the late 30's to 40's original sketch
anyone know of bob allen's sinature to this