HOW TO WRITE A WESTERN BY TERRY HARKNETT PART ONE

The following article was originally published in the August 1979 issue of The Writer Magazine, edited by A. S. Burack. Thanks to Keith Chapman for bringing the article to my attention and supplying scans of the piece. 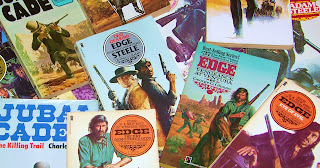 The essence of my advice to would-be writers of any kind of category fiction, i.e, Westerns, Romances, crime novels or any sub-division of these, is related to the fact that I wrote successful westerns before setting foot in the U.S. Contrary to what the textbooks may say, my advice is to write about what you don't know.

Sounds crazy? Do you think I am putting you on while my tongue is lodged firmly in my cheek? Well, I can only speak with authority on my own experience. Which will not teach you how to write but which, I hope, will help you to achieve success with your own writing by adopting a fresh approach.

Initially, a couple of cliches about writing, which like most cliches on any subject, contain more than a mere grain of truth:

1) There's only one way to be a writer - apply the seat of your pants to the seat of the chair and write.

If I paraphrase the second point I think it puts in a nutshell the "secret" of my own success - 49% perspiration and 49% luck.

Because, you see, I am a frustrated mystery writer who has achieved success in a field that I have no particular penchant. For fifteen long years, I wrote mystery novels that were published twice yearly - and sank without trace at the same rate. This taught me how to sweat as I wrote five pages a night every night after completing a day's work on one or another fringe of journalism.

Then luck took a hand, when I got a job on a book trade journal. There, one of my chores was to write a weekly review of new paperback titles for the retail trade, and this inevitably brought me into contact with people in paperback publishing. One such person heard of my evening fiction writing and gave me my big chance - i.e., he commissioned me , for little more than pocket money to write a no 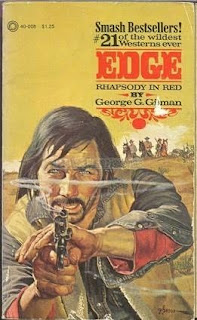 vel of a movie, i.e., a paperback original based on a screenplay.

The movie happened to be a western. I had not seen it and I had never read a western novel. But I had seen my fair share of oaters on the big screen and TV - enough, anyway, to know what the western landscape looked like.

This was William Terry (the name I used on the book) born. And after my first western was well received, commissions for four more books from movies followed. Then the publisher was struck by that 2% inspiration - this all happened when the screen westerns were heavily influenced by the Italian movie makers and had hung up the guitar in the cozy bunkhouse and come out with blazing guns onto the dusty streets and wind blow high plains. Clint Eastwood did not wear a white hat, and when he shot a man, the blood flowed - and showed. The movie west was suddenly tough, but nobody was writing books like that.

So William Terry/ Terry Harknett was asked to write a couple to test the market. But for these he was called George G. Gilman. And thus my protagonist, Edge, came into being, destined to appear in from four to six books per year (current number of titles available, twenty nine) and would chalk up sales of more than 10 million in the five or so years since his inception.