The glitz and glamour of Watford

The Americans have Disneyworld but we Brits have Watford! 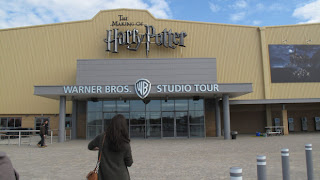 The Making of Harry Potter opened at Warner Brothers’ Leavesden studios last Saturday, on the outskirts of the Hertfordshire town.The three-hour walking tour gives visitors a chance to explore several sets used during the filming of the series, such as the Great Hall, the Ministry of Magic, Dumbledore’s office and Diagon Alley. There are also dozens of props and costumes on display.

However, the price of tickets has been criticised, with adults being charged £28 to attend, and children between five and 15 years paying £21.Several of the film’s stars – including Rupert Grint, Warwick Davis, Tom Felton and Bonnie Wright – were in attendance at the opening, although Daniel Radcliffe did not appear.


Rupert Grint, who played Ron Weasley in each of the eight films, said the opening was “the most glamorous I have ever seen Watford”.

"A tourist attraction opening on this scale always attracts a lot of attention, and we are so pleased that our hotels can benefit from the increase in visitors to the area," said Lynda Matthews, a marketing manager for the website LateRooms.com, which reported the rise in bookings.

Posted by Gary Dobbs/Jack Martin at 02:35