This was THE show when I was a kid, the one that had to be watched by all - it was massive, absolutely gigantic and for awhile it seemed to be the only subject we talked about in the schoolyard. Everything about it seemed so cool - And man, what spin offs the show produced -  the 12" action figure was brilliant. You could roll up the skin of his arm and legs to see the bionics and also look through the bionic eye. I remember getting one for Christmas and for a few weeks I don't think I played with anything else. I also remember having three stitches in my left hand from Dr Moody after I foolishly fell off a bridge while playing at The Six Million Dollar man. Unlike Steve Austin I didn't get replacement bionic parts but only three painful stitches, and a clip across the ear from my old man.

For a few years the show seemed to be everywhere - the show's logo could be found on lunch boxes, belt buckles and T-shirts, the character showed up in a Look In comic  - strip based on the show, and was the subject of posters on bedroom walls everywhere. Yep Steve Austin was the coolest cucumber since Kevin Keegan and his amazing perm. Interestingly that perm was also created in a top secret laboratory, though not on Universal's back lot but  somewhere in darkest Liverpool.

I have very fond memories of this show and now that the entire run has been released on a massive box set which includes all five seasons, the original TV movies and the reunion movies, a box set you'll need bionic strength to carry, I can wallow in 1970's TV nostalgia.

I am able to look at the show again, only this time through adult eyes.

Steve Austin, astronaut: a man barely alive
Gentlemen we can rebuild him
We have the technology
We have the capability to make the worlds first bionic man
Steve Austin will be that man
Better than he was before

WE CAN REBUILD HIM. 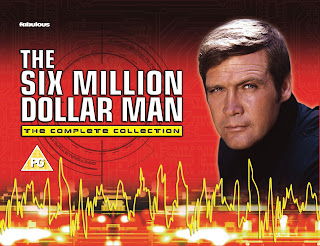 How does it hold up? Well the special effects may look primitive now that we're spoiled with the flawless CGI of current fantasy television, and some of the dialog is so cheesy you could spread it on a cracker. but all the same the program holds a timeless charm. One of the episodes I remembered from watching as a child was when Steve Austin went up against that fearsome big foot creature, and watching those episodes now I laughed at the obvious man in the suit, but just the same I was soon sucked into the storyline. And when you get in the right frame of mind that Bigfoot is just as terrifying as ever. 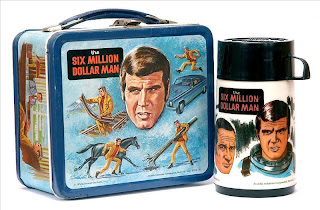 It certainly stands up better than all those other shows from my youth - The A Team, Knight Rider and so on. If you're not a fan then it's unlikely you'll shell out for this box set, but if, like me, you were a huge fan as a kid you just might appreciate having it in your collection. I know I do.

Posted by Gary Dobbs/Jack Martin at 15:26

I was a HUGE fan! I will watch this all over again. Spread the cheese!

I had no idea this baby was out on DVD. Count me in. I can still hear that bionic sound. Cheese on!