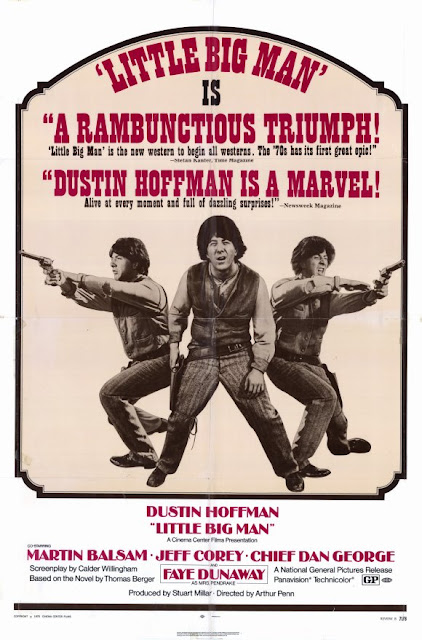 It starts off as a lightweight, comic western and then half way through we are shown the massacre of the Cheyanne Indians who have adopted our hero, Jack Crabb. This is the most shocking moment in Arthur Penn's 1979,  revisionist western Little Big Man. Coming after so much character driven comedy it hits the force of a Winchester on steroids.

Jack stands by helplessly while Custer's cavalrymen cut down his family and then have the temerity to claim they have rescued him. Of course Jack Crabb is a fictitious character but many of the events in the movie were based on truth. And the carnage of Crabb's Cheyenne family was based on 1868 campaign to beat the Cheyenne into submission or exterminate the entire tribe. The movie seemed another example of Hollywood trying to atone for its history of collaboration in White America's imperialist savagery towards the red man, but it is more likely that the massacre in Pen's movie was meant to echo the 1968 events at My Lai in Vietnam which was of particular interest to the director who had criticized the Vietnam war. But whatever the reasoning behind the scene which is anomalous to the rest of the movie it is clear that Little Big Man, like several other major westerns, does something toward adjusting the historical  imbalance of most westerns.

"Arthur Penn's most extravagant and ambitious movie, an attempt to capture the essence of the American heritage in the funny, bitter, uproarious adventures of Jack Crabb." Vincent Canby of The New York Times

The movie supposedly told by a 121 year old man who survived the battle of Little Big Horn, is a triumph that gleefully destroys many of the myths created by Hollywood's long love affair with the western. The mythical gunfighter is shown to be ridiculous, the pure fresh faced frontiers-women ends up on a brothel, the noble cavalry suddenly transform into brutal butchers,  and many iconic historical figures such as Custer and Wild Bill Hickok are shown as pretentious clowns. In fact most of the well worn western tropes are destroyed and it is only  the Indians, Human Beings this picture calls them, who are treated with real affection. They are shown to have been brave, spiritual people However the Indians do not entirely escape the sarcastic wand and at one point a gay Indian, Little Horse is brought to life on the screen. 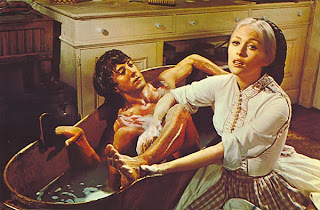 Of course the movie belongs to Dustin Hoffman who is superb as Jack Crabb, convincing as a 121 year old, as well as all other incarnations of our everyman traveling through the western years. It seems that the movie manages to cram in every iconic image the western has ever spewed onto the screen, but throughout it all there is an unmistakable love for the spectacle that only the western can provide - excellent.

Little Big Man is available on both DVD and Blu Ray.
Posted by Gary Dobbs/Jack Martin at 17:04