Those Voices of the West

I've gone and found myself a new favourite podcast that I think readers of the Archive would be interested in - Voices of the West -  Voices of the West is a long-running radio program that examines the Old West and its many characters–both good and bad. The show is hosted by Emil Franzi, recipient of the 2014 Western Writers of America Lariat Award.

He draws on his stable of guests like authors Johnny Boggs and Cotton Smith to talk about the cowboys. Author Jerry Egan chimes in frequently to talk about hiking Apacheria. And, Green Valley News writer Scott Dyke joins Emil on a regular basis to talk about anything and everything concerning the Old West. And past guests have included Peter Ford, the son of the late Glenn Ford and Pam Marvin, the widow of Lee Marvin. Voices of the West has also talked with Old Tucson’s Bob Shelton to remember the great movies made at the famous movie set. 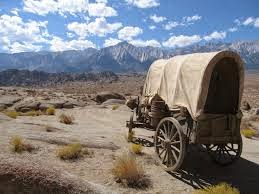 Voices of the West is a radio program originating in Tucson, AZ over AM 1030 KVOI on Saturday at 4pm MST. Host Emil Franzi talks with folks who believe America was better off when our TV shows were about Cowboys instead of Lawyers!, and now that the show is available in podcast format from iTunes and all other podcast delivery systems, as well as on the show's own website HERE. The show can be downloaded for use on your computer or mobile device. Or if you prefer you can simply stream the show from the website.

There's a large archive of old shows on the website - I recently listened to a show that looked at the westerns of James Garner, the actor having recently died when the show was recorded, and it was excellent and a fitting tribute to the great man. The way the host and guests discuss the relative merits of each movie make for entertaining listening for any western fan. The show also plays themes from western movies but given copyright restrictions the podcast and archived shows only contain  few seconds of each song - this is something the BBC also does with the Desert Island Discs. Mind you because most of the show is speech based the listener isn't really missing out on any of the entertainment.


Visit Voices of the West by clicking HERE

Posted by Gary Dobbs/Jack Martin at 03:16

Email ThisBlogThis!Share to TwitterShare to FacebookShare to Pinterest
Labels: VOICES OF THE WEST

I'm shamed to admit it, but I've never heard of this site, Voices of the West. Of course I live a hundred and thirty miles north of Tucson. I will be a listener now. Thanks, Gary.

Thanks for the heads up, this sounds great. I live another 1,000 miles north of Oscar, but online, I will most definitely give this a try.