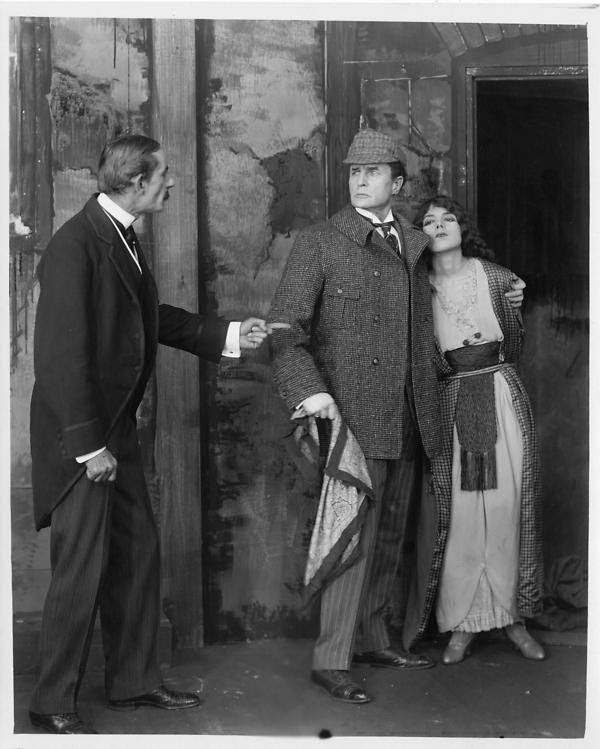 It's news that will have Sherlock Holmes fans roaming the moors and salivating like deranged hounds - A nearly 100-year-old silent film version of “Sherlock Holmes” starring famed Holmes thespian and American actor William Gillette has been discovered at the Cinémathèque Française, the French film archive announced Wednesday.


The rediscovered film is the only one Gillette ever appeared in, and is the actor’s only surviving appearance as the Baker Street detective, a role for which he was world-renowned in stage portrayals. It was Gillette who first donned the deerstalker hat that has remained popular through generations of Holmes performers, including the current favorite Holmes, Benedict Cumberbatch.

Gillette's portrayal of Holmes is legendary and was even praised by Holmes creator, Conan Doyle himself but until now there has been no way to see Gillette's version of the detective.

“It’s an amazing privilege to work with these reels that have been lost for generations. William Gillette’s ‘Sherlock Holmes’ has ranked among the holy grails of lost film and my first glimpse of the footage confirms Gillette’s magnetism. Audiences are going to be blown away when they see the real Sherlock Holmes on screen for the first time.”  Robert Byrne, Film restorer and SFSFF Board President

The nitrate dupe negative of the film, directed by Arthur Berthelet for Essanay Studios in 1916, was discovered in the vaults of the archive a few weeks ago, and is undergoing digital restoration by a partnership of the Cinémathèque Française and the San Francisco Silent Film Festival. The restored film will premiere at Toute la Mémoire du Monde, the film restoration festival of the Cinémathèque Française, in January 2015, and will see its U.S. debut at the San Francisco Silent Film Festival in May 2015.
Posted by Gary Dobbs/Jack Martin at 15:50

Thanks for the info, Gary.

As you correctly predicted, I am curious to watch Gillette's performance. He is a legend among the pantheon of 75+ Sherlock Holmes actors.