“Revenge, the sweetest morsel to the mouth that ever was cooked in hell.” 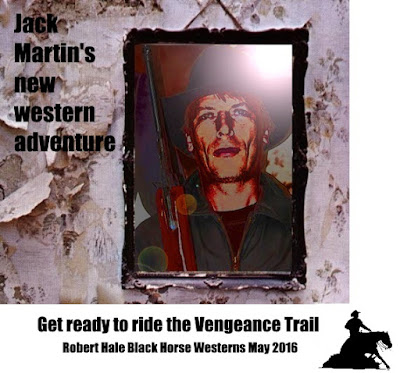 ‘Gutless is what you are,’ Jim Tanner yelled and crossed the room, peered through the slats at the window and then turned back to his son. He shook his head and ran a hand over the stubble on his chin. ‘You craven bastard.’
Ethan glared back at his father, holding the older man’s eyes with his gaze. ‘I ain’t no coward,’ he said. ‘Just not a damn fool is all. If I go out there Fury’ll shoot me down. I’ll have no chance. That ain’t cowardly that’s just good sense.’
‘Pity you didn’t show that good sense when you started all this,’ Jim said and bit the end off a large cigar. He spat tobacco onto the floor, earning himself a look of reproach from his wife who sat in the far corner, a worried expression permanently plastered across her once beautiful face. She could tolerate her husband’s cussing but his vile habit of spitting was best done out of doors.

Posted by Gary Dobbs/Jack Martin at 12:00