The Walking Dead returns for a sixth outing.

Although the season six opener of AMC's Walking Dead was one of the best episodes in a long while, it was the first time a season opener had failed to grow the rating. Although the episode was still a monster hit - According to “live plus same-day” estimates from Nielsen, the zombie drama averaged a monster 7.43 rating in adults 18-49 and 14.6 million viewers overall — up slightly over the show’s season 5 averages but below its fall 2014 premiere (8.65 in 18-49, 17.29 million total viewers). That year-ago opener remains the show’s highest-rated telecast on record. 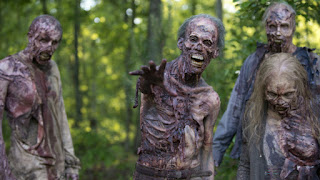 The main thrust of the plot was the horde of walkers in an old quarry that Rick decided must be drawn out and cleared else they get too close to the relative safety of the walled town in which our survivors now find themselves. The episode  was over an hour long with the present-day narrative framed with black and white flashbacks to the days immediately following the season five finale. This, in my opinion, was an effective way to tell what was an action packed story.


We're six season in now and the show is as strong as ever, with the spin off series, Fear the Walking Dead (just finished its first season) also piling up the ratings. So it seems a certain thing that the series will go to seven series...likely, even more.


The reviews of the season opener have been mostly positive - The Walking Dead is the most popular series on television – when it works, it’s magnetic. You hear that unidentified horn blaring in the distance in the premiere’s final moments, drawing thousands of hungry walkers back towards “home,” and you feel the same sense of dread as the characters — that’s a powerful thing six seasons into a show’s lifespan, said Variety. While Forbes said, Rick is teetering very close to full villain at this point. I think it’d be more interesting if he went all the way and had to be stopped. The Twitterverse has also gone bananas with appreciation for the show - 'Fuck that was awesome!' wrote, Stantheman345. Though there were some who were not happy and JWWDIV Tweeted, 'The season 6 premier was not worth the wait. This is by far the worst episode yet. I was bored to tears. Perhaps The Walking Dead has run out of ideas. If this is the best they have now, I will soon stop being fan.'

I'll leave you with Screen Rant's opinion of the season opener - What works about the premiere, then, is how its narrative goals are successfully blended with the presentation of spectacle and the actual needs of the characters within the story. Granted it takes 90-minutes to accomplish this, but to its credit, it manages to do so without getting them confused or muddying up the visual metaphor at the heart of it all. Going this big, shoving this many walkers into one episode, could have felt like superficial overkill, but The Walking Dead made it more than just a visually entertaining endeavor. Added to the complication of the horns sounding in Alexandria at the end, the premiere also managed to make its plentiful walkers feel like a legitimate threat again.
Posted by Gary Dobbs/Jack Martin at 14:05

Email ThisBlogThis!Share to TwitterShare to FacebookShare to Pinterest
Labels: the walking dead