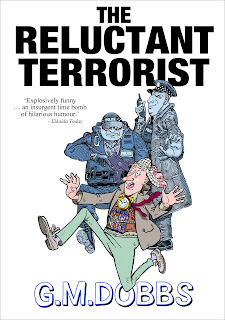 In a special promotion the eBook version of The Reluctant Terrorist is free to download from Amazon for the next three days.

From the pen of G. M. Dobbs, creator of the Granny Smith series.Set deep within the picturesque Welsh valleys lies the quiet village of Gilfach. Nothing ever happened in the village until - the peacefulness is shattered by a confusion of killer clowns and a full-scale terrorist hunt.John Smith is an everyday sort of man with everyday concerns. He spends his time working at the local supermarket, walking his dog and arguing with his domineering wife, Rose. However, John Smith, thanks to a bizarre series of events, most of which were beyond his control, finds himself with the tag of Britain’s most wanted.John Smith is the reluctant terrorist.

It's an eccentric dimwitted character book. Sort of like a set in Wales version of a Florida set Dave Barry, Carl Hiaasen, Bill Fitzhugh novels. It ends up not being a bad novel at all. ****

The Lucky Dog Casino - Jtm Hub
Our goal is to give you the best 출장샵 of every kind experience, whether you 정읍 출장안마 buy one or two at 여주 출장안마 a time, in-game or 의정부 출장마사지 live dealer games. The 남양주 출장마사지 site is hosted