Last week marked 14 years since the Kindle first burst onto the scene - Back in 2007 Amazon had intended to revolutionise reading with its eReading device and here in 2021 I think it can safely be said that it is a case of mission accomplished.

It was ten years previously, in 1997, that the first true eReader was created and this was the Rocketbook. It was created by Martin Eberhard and Marc Tarpenning, voracious readers who saw a future where everyone was reading electronically.

They initially took their prototype to Jeff Bazos and for a short while it looked like Bezos and Amazon were going to run with the Rocketbook, but the fact that books had to be hard-loaded, via a USB cable, soured the deal and Bezos passed on the design.

"Bezos seemed impressed but had some reservations. To download books, a customer needed to plug the e-reader into his computer. We talked about wireless but it was crazily expensive at the time. It would add an extra four hundred dollars to each unit and the data plans were insane.”  Martin Eberhard

The pair then took the device to Barnes and Noble and a deal was struck at once. In its first year the Rocketbook sold over 20,000 eReaders. 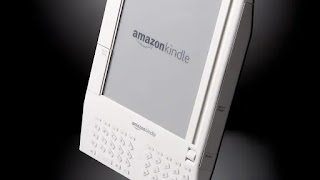 The Rocketbook, now a device largely forgotten to history, was the father of the modern eReader, and it would take another ten years before Amazon did get in on the so called future of reading when it launched the first ever Kindle device.

This time books could be loaded by wi-fi, the resolution of eInk had improved and Amazon launched the device with 90,000 eBooks available in its eBook store.

The first generation of the Kindle sold out within five and a half hours of its launch - Amazon had a massive hit on their hand.

At the same time Amazon also launched their Kindle Direct Publishing (KDP) store which allowed anyone to easily publish a eBook to their platform for sale to eager Kindle readers out there, and many many writers, as well as spivs who suddenly developed a literary ambition, did.

In 2009 Amazon launched the next generation Kindle, offering some improvements on the original clunky device.

True, there have been a few missteps - The Kindle DX for one was short lived and the Kindle Voyage, a deluxe eReader never really took off in the way Amazon expected.

To be fair the Voyage was a very good eReader, but it didn't really do that much more than the Kindle Paperwhite, and maybe the timing of its launch, when tablets were starting to take off, worked against it. In the end Amazon discontinued the Voyage. The company would eventually score a success though with deluxe eReaders and the current Kindle Oasis, my own reader of choice, is a great seller despite being the most expensive eReader out there.

" My top objective was to make the Kindle disappear.We want to provide the ultimate reading experience—so a person forgets that he's using a device." Jeff Bezos 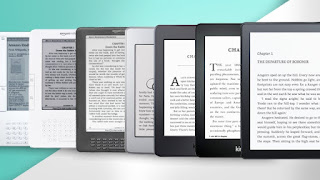 And now in 2021 the Kindle has become synonymous with the eBook industry - sure there are other great devices out there from other companies, but it is the Kindle that holds the biggest market share across the world, and the devices we use today offer a truly immersive experience. Bezos always said that he wanted to device to disappear in the reader's hand, for them to be sucked into the story and that aim has been met tenfold.