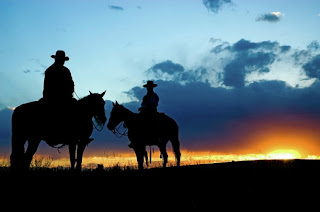 Recently I read an interesting article by blogger, Mark Wallace that bemoaned genre trappings. The article reasoned that many reader miss out on some great fiction simply because they are biased against the genre. This is not a new argument and for many years readers, writers and some publishers have bemoaned genre tags and suggested that all fiction be labelled general fiction regardless of the genre.

The argument has some merit because many readers have preconceptions of certain genres - for instance SF is all bug eyed monsters and the western is all rugged cowboys and savage Indians. And whilst these stereotypes are true to some extent the trulyu informed reader knows that westerns, as well as SF can be so much more than this. There are many different kinds of western, and for every penny dreadful type oater there are several other emotive, sensitive masterpieces.

The western can explore the human condition to the full and is more versatile than most genres in its ability to assimilate other genres into its boundaries. There are western whodunits, western thrillers, romances and even the odd horror western, and yet the genre is ignored and often sneered at by the mainstream book press. Would abolishing the tag western and labelling the books general fiction make any difference? I suspect not but the fact remains that if you are one of those readers who avoid the western because it is too simplistic, then not only are you under a false impression but you are also missing out on some great writing.

Probably the most pure form of storytelling harkens back to the days when primitive man sat around the campfire and told tales of distant lands, great advenure and heartstopping romance - the western is pretty much like that. And now in the age of the eBook there is no excuse not to give the genre a try. Gone are the days when westerns were difficult to track down and most digital bookstores including the giant Amazon have a wide ranging western selection.

So come on - saddle up and go read a western.

Email ThisBlogThis!Share to TwitterShare to FacebookShare to Pinterest
Labels: westerns

Great blog, Gary. Since I write westerns with vampires and rippers as well as more traditional westerns and still find readers, I personally give readers a whole lot more credit for going beyond the labels than the blogger. Readers of westerns, even westerns that cross boundaries like my own or something like Jonah Hex, are intelligent and the mere use of the label Western is not going to turn them away. Sure some folks may hear western and grimace. Honestly, I hear the word "wizard" and I won't usually touch the book--though, here I am, reading at last a copy of The Dresden Files a gym buddy gave me and actually liking it, wizard and all. Readers love a good story, no matter what genre it falls under and that's what, I believe, they judge by. Story and author style trump labels. And I have some exclusive western news coming soon that the publisher and I hope will transcend genre labels because of the way I wrote the tale, though the character is very typically western. So we'll see...