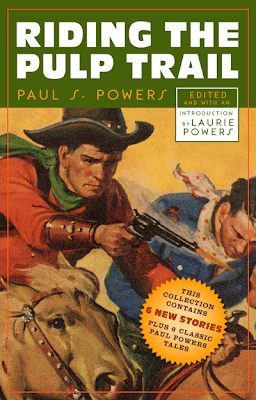 It was great to finally get my hands on this new anthology of pulp western tales from the pen of Paul S. Powers - I've always loved the pulp magazines that were once dominent on news stands, even if most of them had long vanished by the time I was born but I, like many people I suspect, was only ever aware of a handful of the better known pulp writers. Indeed until a few years ago I had never heard of Paul Powers - I was only six years old when he passed away and by the time I started reading the pulps had vanished, their pages yellowing with the turning of time, their bindings, never the strongest, creasing and breaking. The pulps had been forgotten by most modern readers and Powers, like many of his contemporaries, faded away into obscurity. And it was only through befriending the writer's granddaughter, Laurie Powers (a lady who surely deserves some kind of award for her services to keeping the lagacy of the pulp era alive) that I discovered the delights of the pulp westerns.

Laurie saw through the publication of her late grandfather's memoirs, which she had found among a collection of his papers, and the resulting book, Twenty Years in The American Grub Street is much more than an authentic story of a working writer during the pulp era - indeed it encapsulates the entire pulp era  and  is an important slice  of the  history of popular fiction and students of the pulps owe the lady a great debt. The book is still available and highly recommended.

Riding the Pulp Trail is a collection of twelve stories from the pen of Paul S. Powers, with six of the stories recieving their debut since they were never published in the pulps for which they were intended. I actually named this collection, something of which I am very proud because it links me in some small way to the pulp era. How cool is that! And cool would be a great description for the stories found within the lovely retro style covers. The opening tale, Death is Where You Find It ends with a wonderful poetic slice of dialogue which perfectly sums up the stories that precedes it. It starts of at a gentle pace before building up to a furious climax of vengeance and frontier justice. I read several of these stories in the one sitting and finally polished off the final story this morning. Each and every story is excellent and it is clear that Ms. Powers put considerable thought in selecting the tales for this collection. 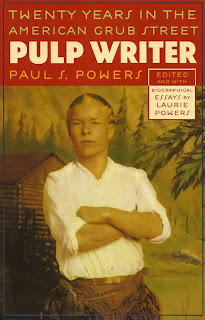 "Paul S. Powers (1905-1971) was a writer of Western fiction and the author of Doc Dillahay, published by Macmillan Company in 1949. He was also a rare book collector and known expert on Western Americana.
Paul was born in 1905 in Little River, Kansas. His father, John Harold Powers, was the town physician. Dr. Powers hoped that his son would follow in his footsteps, but Paul had different aspirations and decided that he wanted to be a writer early in life. He eventually dropped out of high school and began a lifetime of restless wandering across the Southwest. In his late teens, as he struggled to get his early stories accepted for publication, Paul hopped between Kansas and Colorado. As he wandered in the ghost towns in Central City and Blackhawk, Colorado, he accumulated valuable material for later stories and met several unforgettable characters along the way." From Paul S. Powers, Pulp Writer

"From 1928 to 1943, Paul pounded out 12,000 word blood and thunder novelettes every week, featuring his wildly popular characters Sonny Tabor and Kid Wolf, Johnny Forty-five—all written under the pen name Ward M. Stevens—and Freckles Malone, written under the pen name Andrew Griffin. In between writing shoot ‘em ups for his regular heroes, he wrote other novelettes and short stories for Wild West Weekly, some under other pseudonyms and others under his own name." From Paul S. Powers, Pulp Writer.

An excellent book - illustarted troughout the collection really does replicate the golden days of western fiction and is a must read for western fans and anyone who enjoys pure storytelling regardless of the genre.

Posted by Gary Dobbs/Jack Martin at 00:16

Thanks, Gary - I'm so glad that you enjoyed the stories. I did take a lot of time in choosing them. With your great title and with Altus Press' beautiful design, the book has become a real winner.