I can't find any date on this book whatsoever - it's an Australian pulp book published by the Cleveland Company. A Google search on the author comes up with very little other than a list of other books published under the name. Anyone know anything about this writer? 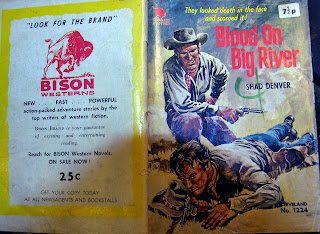 The cover price is UK 7and a half pence so I'd say the book came out sometimes during the Sixties - least in the edition anyway.

The cover illustration is typical of the pulp westerns with a great painting of a gun man crouched, gun in hand, over a fallen man who is also holding a Colt and sporting a nasty gash to the side of the head. The back cover features an AD for Bison Westerns so I guess the imprint must have been a part of the Cleveland Company.


My knowledge of the early pulps is not great but I am improving all the time so anyone know anything else about this book then please let me know. 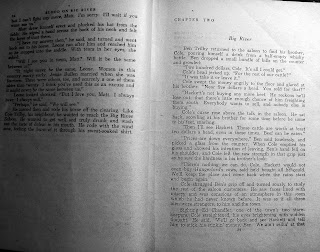 It's not the best western I've ever read but it's an enjoyable enough page turner and because of its brevity it can be consumed cover to cover in a little over an hour.
Posted by Gary Dobbs/Jack Martin at 12:36

wow...a whole book in an hour. sounds like my kinda book!

I love finding old pulps like this and that cover is great.

I have a few "Shad Denver" titles stored away among a couple of grocery box-fuls of Cleveland westerns.


I agree with your assessment of their attraction.

The Cleveland 100-page, digest size pulps are mostly fast-paced, action-filled short novels, many written by the company's former stalwarts Keith Hetherington and Paul Wheelahan, who later switched stables to Hale's Black Horse Westerns. Which was lucky for most of the world -- except for Cleveland's native "lucky country"! It seems Australia's about the only place left where you can get Cleveland westerns (or Bison, Winchester, Arizona, Bobcat, Cougar, Top Hand, Peacemaker etc, etc westerns -- crazy how many "imprints" they used).

I think "Shad Denver" was a house pen-name used by/for more than one writer, but Dave Whitehead once told me: "The fellow who wrote most regularly under that pseudonym was Des R. Dunn, a one-time editor at Cleveland (I think) and by all accounts very, very embittered by the fact that his books continued to make money for the company for years afterward, even though he himself never saw a penny more for his efforts. I think he may still be alive somewhere in Oz, but am not sure. I do know that some of his series westerns, including THE LONER (as by Sheldon B Cole) and HALLIDAY (as by Adam Brady) were pretty good, pacy yarns. He also wrote very prolifically as Gunn Halliday. I believe he even knocked out some LARRY KENT mystery stories as well."

A side note: It was because Cleveland were over-stocked with western MSS and not buying any more at the time (1992) that I submitted the first "Chap O'Keefe" book to Hale as a potential BHW. Now, 23 books later . . . but hey, we won't drag you there, that's another writer, another story!

Nice. I don't think I could read a book in an hour, though. How long is this one?

Enjoyed this review. I've just posted on my blog something I think you'll really enjoy. Check it out!

Keith - I knew you'd come up with the goods here. When it comes to pulp writers I think of you as an extension to Google - Chapoogle if you like. It's interesting how many guys worked under the countless names during the reign of the pulps. There's a good book in that if someone bothers to look into it.

General point - yeah an hour - hour and half at most and these books are finished. They're slim volumes but often big on story.

Yes, even if it's not the greatest story the cover makes it worth owning.

Not only is the artwork a great example of western pulp art, but that tagline is enough to make most folks fork over the quarter, back in the day. Reading a book in an hour? I'm like Chris: don't think I could do that...unless it was an audiobook.

I hardly ever read a book straight through that way. Lana always looks at me funny as I switch back and forth between the 2 or 3 books I'm reading at the same time. Not sure why I do this but it's habit by now. At the moment I'm switching between 5 books.

Gary - I'm no authority on pulp writers! People like Steve Holland, Pat Hawk, Duane Spurlock and David Whitehead know much, much more. But like yourself I'm always happy to pass on what I've heard and read, and -- in limited areas -- what I've known personally.

Charles - that's a talent I envy. I can read two books at once - as long as only one's fiction. Mind you I sometimes read several graphic novels alongside my usual book.

It's so fun to find old books like this. And thanks to Chap O'Keefe for the extra info.

I'd quite forgotten some of these old books. Must pay more attention when perusing Ebay. And, I agree an hour or so to read a book like that sounds right.
When I worked in London I had to take two Louis L'Amour books with me as in the hour of travelling I would have either read most or all of the first book. Another would be done and dusted in the lunch hour. Ditto applied to Perry Mason as well. I'd doze on the journey home.

Ray - Course the trains were never on time. LOL