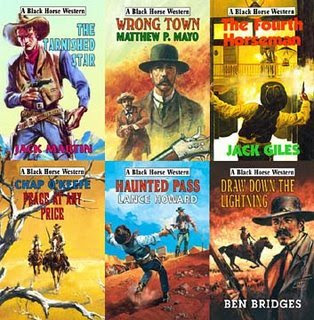 THIS ARTICLE BY OUR OWN LANCE HOWARD/HOWARD HOPKINS WAS ORIGINALLY PUBLISHED ON PULPRACK. IT IS REPRODUCED HERE WITH PERMISSION OF THE AUTHOR.

Remember the days when action was king and nothing stood between a man and his horse except a saddle?

Recollect the times when the hero wore a white Stetson and soiled doves had hearts of tarnished gold?

Recall an era of blazing fiction when a knockdown, drag-out saloon brawl proved might was right and justice came at the smoking barrel of a Colt Peacemaker or a members-only neck tie party?

If you're a fan of the western pulps you durn sure do. For ten cents readers could saddle up a stallion, down bottomless glasses of redeye and cavort with the prettiest fillies this side of Dodge. Playing poker with Wild Bill or ridin' the written range with Buffalo Bill Cody, the only limits were imagination and Liberty dimes.

Those were the days. The Wild West. The Mythical West. Brimming with legend and crackling with tall tales told 'round the fire. Men were men, women were courted, and you dang sure knew who the bad guy was. And by the end of the tale you could count on that desperado getting his, usually by hanging from hemp or riddled with .45 slugs.

If you are a pulp western fan you might also pine for the days when you could walk to the local newsstand and select the latest Wild West or even Spicy Western Stories Magazine. Sadly, those brittle paeans to six-gun sovereignty no longer exist.

Most modern westerns are a trail apart from those halcyon days of dust and danger. In fact, many are slapped with the Historical genre label as publishers' marketing departments try to pretend the western is deader than Wild Bill himself. But for fans of the horse opera pulps a handful of modern writers seek to carry on the tradition, at least in spirit, while bending the literary horseshoe to the modern publishing requirements. Peter Brandvold, Ralph Cotton and a passel of others still pen tales of the Old West that hark back to the myth and pulp. Admittedly, the market appears minuscule at times, especially if you walk into a local Borders or Barnes & Noble in the North East, where I live, but rest assured they are out there if you search hard enough. Online ordering from Booksamillion and Amazon.com have made it easier to locate these novels, as have specialty online western stores such as Tombstone Books.

A couple sites that may surprise most western fans are AmazonUK and WHSmith, two British booksellers. You might wonder exactly what the Brits have to do with westerns, and rightly so. The answer may come as a pleasant discovery.

Two British companies -- one, a hardcover publisher named Robert Hale, Ltd. (these books are actually called "paperboards" and are small collectible hardcovers with colorful pulplike covers) and the other, a large print trade paperback company called Ulverscroft -- publish a monthly selection of old-fashioned westerns that come as close to the grand pulp days as you are likely to find. I know because I write for them under the penname Lance Howard.

Hale's imprint is called Black Horse Westerns (Ulverscroft's are called the Linford Western Library and Magna Dales Western Library) and they have been churning out 10 to 12 shoot 'em ups a month for many years. The books focus on the mythical west: gunfights, jangling spurs, sateen bodices with bulging bosoms -- you name it, chances are a Hale western has it. The writing spans the range from passable to excellent, much the way pulp writing did. The flavor is dust and it goes down jest fine with Old Orchard.

, please feel free to ride on over to my website and take a look around.

The cost to ship the westerns through AmazonUK, oddly enough, is no more expensive than getting the few titles Barnes and Noble has available for the U.S. In fact, it is often cheaper, as exchange rates fluctuate. While I unabashedly suggest running an AmazonUK search for Lance Howard, try running Black Horse Westerns, then browse through the books that come up. Black Horse is carrying on the pulp tradition, with a minimal of modern intrusion. Give them a try! I think you'll enjoy them.

NOTE -This article is several years old but I've republished it here for Archive readers as it still gives an interesting insight into the Black Horse Western Books.

Posted by Gary Dobbs/Jack Martin at 10:02

Love it. Makes me want to strap on my shootin' iron and go riding.