10 WESTERNS YOU MUST WATCH - TEN 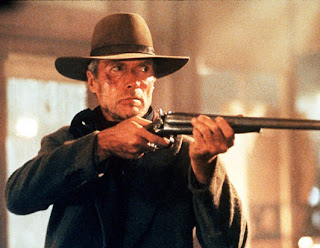 Maybe the last truly great western made - we've certainly had nothing since that comes close to this masterpiece which is a revision of the revisionist western.

The film utilises many traditional western themes - the whore with the heart of gold, the young gunslinger, the good bad man and his noble sidekick and a brutal sheriff trying to impose justice in a frontier town. But through a series of revelations the viewer's sympathies are displaced as the movie unfolds.

Posted by Gary Dobbs/Jack Martin at 02:46

One day I might work out why I never clicked with this film. To me it's just dour and ponderous with no sense of fun, being the only Clint western I don't like. I find it curious that I pretty much like all Clint's films, even, and perhaps even especially, the inane ones like the second Clyde one and the one with the pink car, and yet the two Clint films that I can't abide are this one and Million Dollar Baby (trite and couldn't hear a word anyone said) and yet those are the ones that achieved critical acclaim. Odd that!

I think it's great..but I can see mr parnham's point.It's dour but it works. The screenplay 'the cut whore murders' was around for a while but that catchy title didn't click with anyone -including Coppolla, apparently-until mr laurel's son picked it up.

I like UNFORGIVEN but I'm a bigger fan of TOMBSTONE and the remake of 3:10 TO YUMA.

I J - You must give it another try. When I saw it the first time I had mixed feelings and felt it never really got going. But on repeated viewing I loved it and now I can't decided which is the best Eastwood directed western - this or Josy Wales.

Oh and I agree with million dollar baby which I did find slow and ponderous. Mind you Eastwood's real bad stuff comes from the Pink Caddie, Rookie period.

Not to be overlooked is Clint's contribution to the soundtrack of Unforgiven. His piece "Claudia's Theme" (plays at beginning and end of film) is pretty darned good!

Chris - I actually bought a Kyle Eastwood album today. Will let you know what I thought

I guess it comes down to what the individual viewer sees in a western. 'Unforgiven' like 'Appaloosa' gives more time to character and story that the usual shoot 'em up movies.
With Clint Eastwood - you think 'Dollar' movies, Two Mules For Sister Sarah, High Plains Drifter, Joe Kidd, Outlaw Josey Wales and Pale Rider. Action speaking louder than words. So 'Unforgiven' is different - yet it is a movie that is judged right in its presentation - and Clint gets to act his age.