10 westerns you must watch- nine 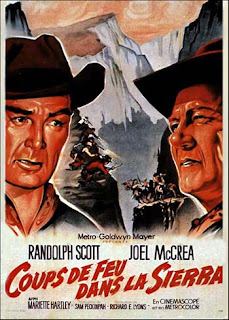 Peckinpah used The Inyo National Park in the same way John Ford would use Monument Valley. And never was the location used so well as in this excellent character western that is never tiresome...no matter how many times it's viewed.

Casting western legends Randolph Scott and Joel McCrea in their twilight years was a stroke of genius - the two men play off each other wonderfully in this parable where the thin line between good and bad is obscured.

The two leads play a pair of former lawmen who are transporting gold bullion at a time when the frontier was vanishing and their aches and pains of aging are all too evident. Together they must face up to the only future awaiting them - that of a frugal and miserable old age.

An excellent film and to my mind Peckinpah's best western - and that's saying something.


TRIVIA:
With only a budget of $800.000 Peckinpah broke into the Mutiny on the Bounty Set and stole most of the sail canvas he used to construct the tents for his mining camp.

Randolph Scott rode off into the sunset at the end of this movie - believing it was the perfect way to end his long career.

Peckinpah tossed a coin to decide who would get star billing Scott or McCrea.
Posted by Gary Dobbs/Jack Martin at 09:15

Ride The High Country was one of the best - Warren Oates went on to appear in Peckinpah's 'The Wild Bunch'.
And a good for Scott and McRae to bow out with.