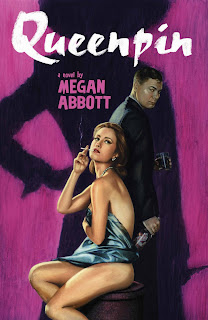 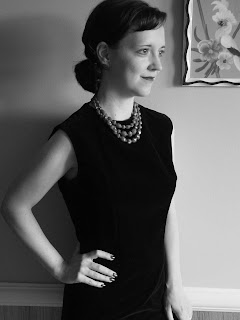 Dame of darkness, mistress of mayhem - you'll have to forgive me as I could go on all day. It's my tabloid sensibilities but both titles fit Detroit born writer, Megan Abbott like a glove.

She was awarded with an Edgar in 2008 for her novel, Queenpin. Her 2005 book, Die a Little (which is currently wowing us over here in the UK) is due to be turned into a major Hollywood film with Jessica Biel in the starring role.

Each of her books are packaged in stunning pulp-style paintings that are as enticing as the prose within. I wondered if Megan has any input into these covers?" 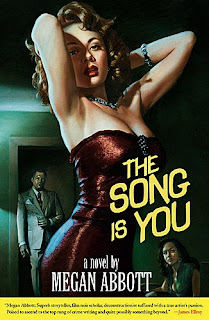 e Roy found Richie Fahey, the artist who’s done all four of my covers. It’s been revelatory for me. I feel like he not only captures the world of the books as they play out in my head, but his covers actually heighten that world, give it new elements. Whatever mental picture I had of the characters gets replaced the minute I see the covers. His vision takes over. It’s a thrill.

Die a Little (currently the only title published in the UK) is wonderfully plotted - the story is on slow burn, serving up enticing little snippets that lead the reader to the twisty, jaw dropping conclusion. The plot is so detailed that I wonder how much plotting Megan did before taking pen to paper or fingers to keyboard? 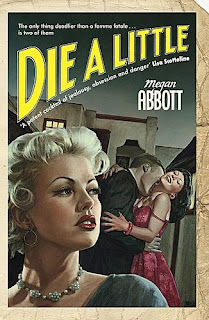 so much, because plotting is definitely the part that comes the hardest for me. I tend to think more in terms of a character arc than a plot. Die a Little was pretty inchoate in its early drafts for just that reason. I had to literally carve a plot out of it. I learned a lot from that experience. But I still lean towards a really classic temptation-sin-punishment arc, which probably says a lot about me. And I still can’t outline. I was talking with Reed Farrel Coleman about that recently—how we resist constructing outlines because we know ourselves and know we would become slaves to the outline. Lots of writers can just use it as a guidepost, but I couldn’t. I’d stop seeing other possibilities. So I try to give myself just enough of a plan to allow me some freedom and room for those moments you hope for, where you surprise yourself."


"I’m a character junkie, to a fault. When I read, I really fall for characters and will follow them anywhere, not even caring where the story goes. That said, storytelling is a true art, and one I admire. I know people who are just born to it, like Hard Case Crime’s Charles Ardai. He’s not an ei ther/or guy. He writes beautiful characters, like his John Blake (Songs of Innocence), whom you just fall for. But you sit down with him, and for any character, he can give you five premises, for any premise, he can sit there and literally map out the book for you, globe-trotting, heists, double-crosses and heartbreak. It’s remarkable. "

Die a Little has a great sense of time and place - it's got that 1950's vibe? Is period important to the story? Could Die a little be set in modern times as indeed it is mooted the film version will be?

"I think Die a Little could be told now—and I know that’s the plan for the possible film adaptation—but it’s hard for me to picture it, since to me it’s so 1950s-specific. That sense of restriction, of containing desire. Of our retrospective and possibly misguided sense that the ’50s was this time of black and white, of this perfect, plastic surface and this roiling chaos beneath it. The story hinges on Lora, the protagonist, peeling back her sedate, repressed world and being shocked, and tantalized, at what she finds. It’s hard to imagine that happening now. So little is hidden."

Tell us a little about your new novel Bury me Deep due for a July US publication.

"It’s loosely based on a famous real-life 1930s tabloid case known as the Winnie Ruth Judd Trunk Murders. This lovely young woman is left by her husband in Phoenix, Arizona at the height of the Great Depression. Very naïve, very lonely, she falls in with these two pretty wild party girls in town. There’s a man involved, a charmer and one of the town’s big players. And things quickly turn very, very dark. I wanted to mix what might be kind of a classic Edith Wharton-style dilemma—a lonely woman slipping from propriety to decadence—with a pulp plot and style. Sort of knock those two sensibilities together and what happened."


So who influences the writing of Megan Abbot?

"The big boys, especially Raymond Chandler and James M. Cain. Always and forever James Ellroy. Lately, I’ve been reading Daniel Woodrell’s novels nonstop. Movies are an abiding influence too—for Bury Me Deep, it was all those wild little pre-Code movies from the early 1930s, like Three on a Match and Baby Face—they’re like a window into the dirty 30s. There’s a frankness, an honesty, humor and also a real darkness. "

It will be no surprise for Megan to list films as a major influence. She is well known as something of a film buff and recently talked noir on the excellent OUT OF THE PAST PODCAST. So for fun I put it to Megan that she's stranded on a desert island and can have three films which she can watch over and over again. What would they be?


Finally Megan contributes from time to time to the Rap Sheet Blog. Will we ever see a solo Megan Blog?


"No. It’s too much work! I am amazed at how you folks do it. It takes me a half-day to write on those posts. I’m not a natural at it, but I envy those who are. "

You can't go wrong with QUEENPIN or THE SONG IS YOU. Two great novels I read last year and I'm still enjoying the anthology, A HELL OF A WOMAN edited by Megan. Good interview Gary, and I'm now in search of Daniel Woodrell’s novels. I have to keep up with the "Dame of Darkness."

Great interview, Gary. Megan's become one of my favorite writers in recent years. And I love the cover for the new book, can't wait to read it.

All - yeah the books have been slower to arrive in the UK but Megan says they are coming. I've read Die a Little and have ordered Queenpin from Amazon. The others I'll get when they're out over here.

I too love Megan's writing - Die a Little was one of my faves last year.

Great interview. I've not yet tried her work but i've heard so much about it that I need to do so.

I've said it before; Archavist, you are a first class interviewer. I hope you will start doing this for money somewhere; you deserve it.

If I had to lose the Barry Award to anyone last year, I'm glad it was Megan. She has carved out her own unique niche.

Great inteview, Gary. And Daniel Woodrell is amazing for anyone who hasn't read him. WINTER"S BONE may be his least pulpish but it's my favorite with TOMATO RED close behind.

Another good interview - love the cover for 'The Song Is You' - a real harken back to the days when film stars were the influence. In this case Susan Hayward