10 westerns you must watch - eight 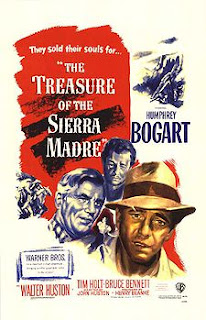 The Treasures of Sierra Madre
US 1948 Directed by John Huston

There are those that dispute this movie is a western at all - this is largely because it's not set in the classic western period of 1865 - 1900. Instead it's set in 1920's Mexico. It's also one of the best studies of greed and the evil in can provoke.

It is a western, though. It's set in the wilds of Mexico and concerns three gold prospectors hoping to strike it lucky while having to face the constant threat of attack by bandits. The wild west may have been over by this period but the film used themes that have provided grist to the mill for western writers and film makers since the genre was invented.

Humphrey Bogart (the greatest actor there ever was and ever will be) plays Frank C. Dobbs. But don't be fooled by the distinguished surname because this guy is bad with a capital B. Course he doesn't start out like that but his desire for gold certainly turns him that way. 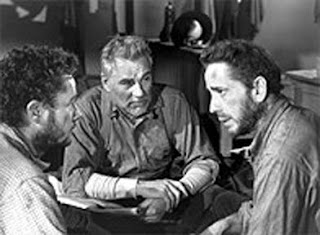 The director's father Walter Huston plays a grizzled old prospector and one of the three men team that includes Bogart. When the three friends make a substantial gold discovery and start to split up each others share on a daily basis the trouble starts.

Paranoia creeps in and soon the three men are at each other's throats with Dobbs's paranoia becoming so great that he turns into one nasty unpredictable son of a bitch. Bogart effectively plays the creeping madness growing on the man and keeps the film heading towards its dark conclusion.

A contemporary western and a classic movie that would rate inside my top ten movies of all time.
Posted by Gary Dobbs/Jack Martin at 13:32

In your past posts I didn't see any movies that had Cameron Mitchell in them. He used to be in western movies.