William Shatner, self proclaimed cool old dude,  is once again eyeing up a role in the next Star Trek movie - the veteran actor seems to forget he was killed in a previous movie, and that they'd have to fly around the sun twice or something to bring him back. Mind you, this is sci-fi!!!

The veteran actor played the role of Captain James T Kirk in Star Trek for 19 years said that, just as his original co-star, Leonard Nimoy, had made an appearance in JJ Abrams' 2009 Star Trek revamp, he would also be pleased to have a role in the sequel to the movie saying: "I'd be delighted".

He added that one of the main motivations for wanting to appear in the film, which is due out in 2012, was so he can feel larger than life next to JJ Abrams. He joked: "I've become acquainted with JJ Abrams and he's smaller than I am. I like to find people I can stand next to that I can tower over." 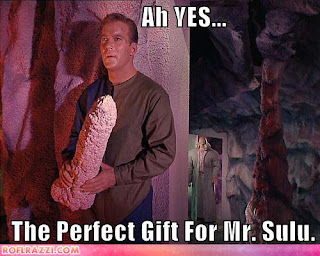 William stars in the new television sitcom $#*! My Dad Days. He plays Ed, a sharp-tongued father, whose son, when forced to move back in with him, is faced with the ordeal of re-establishing a relationship with his rather over opinionated, politically incorrect father.
at March 04, 2011