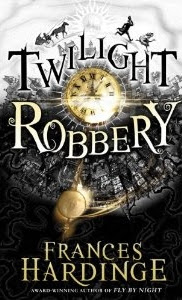 Marketed as a young adult title, Twilight Robbery will be enjoyed by anyone who enjoys well written fantasy, no matter what their age.

It's a sequel to the bestselling, Fly By Night which I must admit I've yet to read. Indeed I don't think I would have read Twilight Robbery, had not the publishers sent me a proof copy. I didn't think I would like this but a few pages in and I was surrounded by story.

A black eyed orphan called, Myra, a poet who can't sell his work, a psychotic goose and a  dandy knight with personal problems - add them all together and you've got an inventive and compelling story. There were times when the whole thing reminded me of Terry Pratchett such is the absurdity of some of the situations, however any comparison is a little unfair since this is a totally original story, least I've never ever read anything quite like it.
Posted by Gary Dobbs/Jack Martin at 16:06

Her name is actually Mosca.

And I loved this book! It's my favourite - which, considering how many books I have read, is saying something.