THE COMPLETE LITERARY 007 - Role of Honour by John Gardner 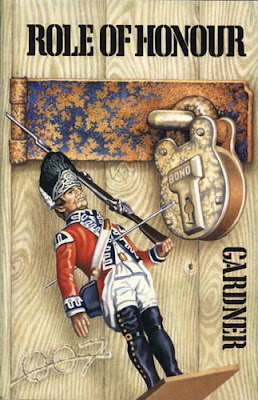 " I think it's the weakest of the series so far,' author John Gardner said of his fourth Bond novel on its original release. And with good reason - Gardner was exhausted when he wrote this book and had been expecting a year's break after writing Icebreaker but sales were strong, and the break never materialised. Gardner was basically. Maybe the author's opinion was coloured by the many problems during the writing of the book - for instance one chapter, which featured a computer game played between Bond and the villain, had to be rewritten at the last moment when the publishers realised there was a very similar scene in the upcoming unofficial Bond movie, Never say Never Again.

“I thought I had gotten the modern equivalent of the famous golf game, or the bridge game with Drax,” Gardner said of the deleted sequence.

Role of Honour, great Bondian title by the way, saw 007 go hi-tech -
After receiving a large inheritance, James Bond 007 is accused of improprieties and drummed out of the British Secret Service. Disgusted with his former employers, Bond places his services on the open market, where he later attracts the attention of representatives of SPECTRE who are quite willing to put their one-time enemy on their payroll. But the whole thing was a hoax, just a plan to get Bond inside the enemy's organization.

Prior to joining up, Bond spends a month in Monte Carlo with Miss 'Percy' Proud, a CIA agent who teaches him everything she knows about programming languages and computers in general. This background allows Bond to attract Jay Autem Holy, an agent of SPECTRE who left The Pentagon, faked his death, and later started a computer game company that creates simulations based on real-life battles and wars. 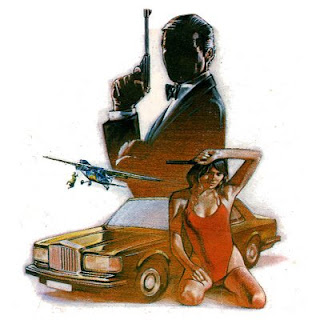 Bond's allegiance to SPECTRE is periodically questioned throughout the novel, even at one point going so far as to send Bond to a terrorist training camp to see if he has 'the right stuff'. Proving his worth, Bond becomes involved in a plot to destabilise the Soviet Union and the United States, by forcing them to rid the world of their nuclear weapons.

What SPECTRE leaders Tamil Rahani and Dr. Jay Autem Holy suspect, but never fully realise is that Bond's resignation is false. Along with Bond, the Secret Service plays a vital role in foiling SPECTRE; however, Rahani, the current leader of SPECTRE is able to escape Bond's clutches by parachuting out of an airship over Switzerland.

Role of Honour may be something of a disappointment after the excellent, Icebreaker and because of it featuring computers  as a main part of the plot, it has aged far more than Gardner's other Bond novels. The problem is that the book takes so long to start going and the lengthy section in which Bond is briefed on computers is actually boring. All the same there are some great sequences in the book and once again the film series seemed to be paying attention to the Gardner books - the battle in the blimp airship was taken and recreated frame by frame for the following year's Bond movie, A View to a Kill.
Posted by Gary Dobbs/Jack Martin at 12:59