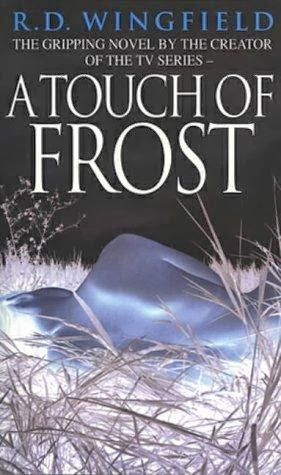 A Touch of Frost is actually the second book in the Frost series as written by R. D. Wingfield and is another excellent read. In structure it follows the pattern set out by the first book,  Frost at Christmas and once again we follow Frost as he stumbles from baffling case to baffling case before everything comes together in the end. The character of the books is far removed from the version served up in the TV series, but even so I found the image of Del Boy popping up in my mind every-time Frost was on the page - this was not a problem as I love David Jason's portrayal of the character but the version found in the books is so far removed from the sanitized small screen version that he might as well be a different character. Imagine how the TV Frost might have been had Mary Whitehouse never existed and you pretty much have the character found in the original books. On the small screen Frost is a scruffy maverick cop who bends the rules slightly, but on the page he is scruffy, undisciplined, chauvinistic and often buffoonish. He has his good points though and identifies more with ordinary people than his ambitious colleagues in the force, which is something that sets him apart and just may be the reason why he is such a good copper.

He's also a chain-smoker with some truly disgusting habits. At one stage in the book Frost is dismayed to find he has run out of teabags for his morning brew, and so he gets a used one from the kitchen bin and uses that - yuck! He also risks getting a pretty young police officer killed in an unofficial operation to catch a serial rapist and is never more than one step away from being drummed out of the force.

The Blurb - Sleepy Denton is sleepy no more; a dead junky, a missing girl, a robbery at the strip joint, an MP accused of a hit and run offence and a multiple rapist at large are all sent to try David Jason’s already overworked DI Jack Frost.

A rapist on the loose, a young girl missing, a robbery at a leisure complex run by a low life, and an old man knocked down by a driver who wouldn’t stop … Detective Inspector Jack Frost knew that there would be lots more to come.


It's another frantically paced novel with the secondary characters fully drawn and a real sense of suspense, but there is much more humor in the book than there was in the debut novel. There are times when the way Frost deals with his superior will have the reader laughing out loud, but there's a real humanity about the character of D. I. Frost and that jumps out from the page. He us essentially a loner, a man who can't even properly grieve over his wife's untimely death from cancer.

Email ThisBlogThis!Share to TwitterShare to FacebookShare to Pinterest
Labels: a touch of frost, r d wingfield