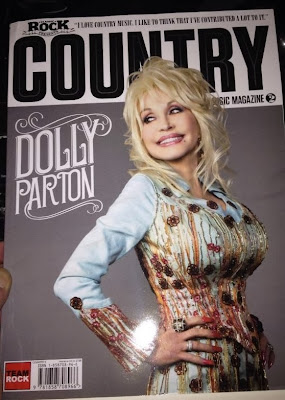 Issue 2 of Classic Rock: Country Music Magazine is in the shops now. The cover star is Dolly Parton, her with the splendid rack,. And although Parton is not really my cup of tea, too poppy for me, I did find the interview in the magazine to be interesting, with some great anecdotes. The magazine also boasts another major  interview - this time with  legend Marty Stuart.

The magazine edited by Ed Mitchell's already made big ripples  in the country music scene and the fact that such big names have given their time to be interviewed for the magazine is testament of that.

Besides all that the magazine is stuffed full of reviews and features written by a knowledgeable team who have a love for the music in all its forms. I particularly like the attention given to new acts that I would not have heard of elsewhere. It's away of discovering new artists and that fact that the magazine covers everything from folk to alt. country means that there will be likely be something of interest to fans of all forms of country music.

This being the second issue means that we now have a letters page and the first letter was written by yours truly. The letter, signed by my Jack Martin persona congratulated the team on the début issue and requested more of the same. I paraphrased the classic Kris Kristofferson song, Sunday Morning Coming Down to make a point that the DAB radio Country Music Magazine show should be moved from a Sunday afternoon to a midweek evening slot. We're all hungover on a Sunday you see.

"Issue One was a great and fills a gap in the UK music magazine market, and also a gear radio show to go along with the magazine but really does it have to be stuck away on a Sunday afternoon? Country music is alive and well and particularly potent and we've all got hangovers on a Sunday afternoon. I have to remember to tune in on a Sunday afternoon but as I wander around smelling the scent of someone frying chicken and wishing it were Monday, because there's something in a Sunday that makes a soul forget to tune in."

The magazine comes with a free 12 track CD collecting tracks from some of the most interesting contemporary country music.

Posted by Gary Dobbs/Jack Martin at 17:57