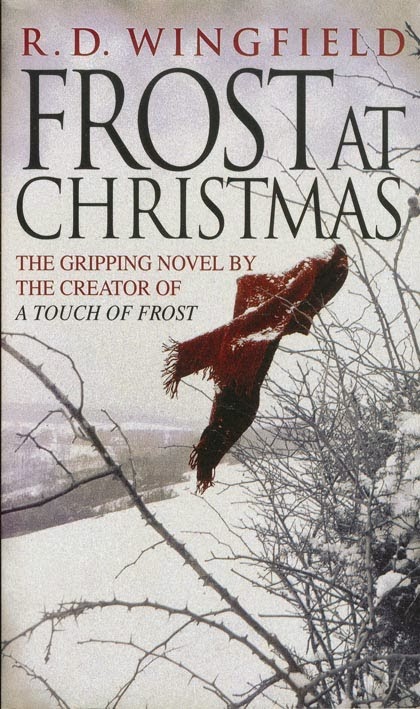 I'd read this book years ago but recently I'd been reading and enjoying the Inspector Frost continuation novels by James Henry, actually a pen name for James Gurbutt and Henry Sutton, and I decided it would be nice to revisit the originals and see how the new novels compare to those written by Frost creator, the late R. D. Wingfield.

Frost at Christmas was actually the first Inspector Frost book. It opens with Frost being shot and then we are told the story that takes us to this point with the life of Frost hanging in the balance. Given that Frost is a long running character then his survival comes as no surprise, but the author had originally intended to kill the character off but was persuaded to leave the story open ended. The book was written in 1972 but went unpublished for several years, finally seeing print  in Canada in 1980. In the meantime the author had used the character in a radio play entitled, Three Days of Frost and actor/comedian Ronnie Barker was due to take the role but in the end  it  was Leslie Sands who became Frost for radio when Barker became unavailable because of TV commitments. The radio play was so popular that Wingfield wrote another play, A Touch of Frost which he would later turn into the second Frost novel which saw print in 1990.

Back to Frost at Christmas - the plot involves a missing eight year old girl, as well as a thirty year old bank robbery. Both cases merge together and keep Frost and the Chief Constable's nephew, Detective Constable Barnard run ragged. There is much humour in the slovenly character of Jack Frost and the author is at pains to create an anti-establishment character who find himself trapped very firmly within the establishment he despises.


The blurb reads: Ten days to Christmas and Tracey Uphill, aged eight, hasn't come home from Sunday School. Her mother, a pretty young prostitute, is desperate. Enter Detective Inspector Jack Frost, sloppy, scruffy and insubordinate. To help him investigate the case of the missing child, Frost has been assigned a new sidekick, the Chief Constable's nephew. Fresh to provincial Denton in an oversmart suit, Detective Constable Clive Barnard is an easy target for Frost's withering satire.

__Assisted and annoyed by Barnard, Frost, complete with a store of tasteless anecdotes to fit every occasion, proceeds with the investigation in typically unorthodox style. After he's consulted a local witch, Dead Man's Hollow yields up a skeleton. Frost finds himself drawn into an unsolved crime from the past and risks not only his career, but also his life... 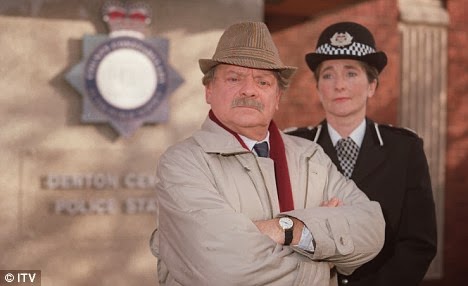 The story was used as the basis for the first episode of the popular, A Touch of Frost TV series which starred David Jason in the title role. Jason had become a big fan of the books when his good friend Ronnie Barker had expressed regret at not playing the role in the original radio series. Jason was starring alongside Barker in Open all Hours which was the TV series that prevented Barker taking over the role of Jack Frost for Wingfield's radio play. This David Jason became the face most recognisable as Inspector Jack Frost.

There are several differences between the TV storyline and the source novel - for one thing the involvement of a medium which is a huge plot point in the book is ignored, but the character of the eccentric old woman who lives with a horde of stray cats is maintained. The character of Frost is also somewhat toned down - in the book he is a scruffy, crude, chain-smoking copper who acts on hunches and completely disregards the rules. In the TV series he is a scruffy, occasional smoker who wisecracks his way through cases. In the book Frost's wife has already died of cancer when the story starts, but in the TV series she is in the last stages of her terminal illness. The main difference though between TV series and book though is that in the book the little girl is found dead while in the TV episode she is found alive and suffering from nothing more than a bang on the bounce.

The book then is darker and far better than the admittedly excellent TV version, but both are worth your time.

Posted by Gary Dobbs/Jack Martin at 18:04

I couldn't agree more. I loved the TV show first, and when I picked up the books I was suprised to see how different they were. Not only are the crimes very much toned down, but they omitted the self doubt that Frost struggles with through much of the series of novels and morphed Mullet's total contempt for Frost into a kind of grudging respect for an unconventional copper. You can see why RD Wingfield said that the TV version was not "his" Jack Frost. That being said, I loved both the TV series and the series of novels, and would happily recommend them to anyone.