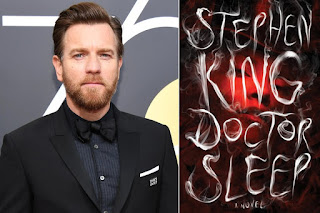 Ewan McGregor is to play the grown up Danny Torrance in the movie version of Stephen King's Shining sequel, Doctor Sleep.

The book picks up with Torrance in middle age, still haunted by demons both real and internal. He works as a hospice nurse, using his psychic powers to ease the transition for dying patients, but he’s also fighting for sobriety, the same addiction that made his dad so vulnerable to the evil forces lingering around the Overlook Hotel decades before.

The movie is being directed by Hush and Oculus filmmaker Mike Flanagan, whose previous thriller Gerald’s Game was also an adaptation of a King novel.

The question is though will this be a sequal to King's Shining or Kubrick's Shining - as King explains - 'One of the things — and I’m not sure if this is going to be a problem for readers or not — is that Doctor Sleep is a sequel to the novel. It’s not a sequel to the Kubrick film. At the end of the Kubrick film, the Overlook is still there. It just kind of freezes. But at the end of the book, it burns down.'

Posted by Gary Dobbs/Jack Martin at 16:50

Email ThisBlogThis!Share to TwitterShare to FacebookShare to Pinterest
Labels: doctor sleep, the shining