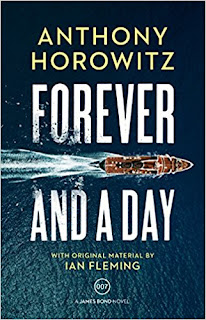 Jonathan Cape, part of the Random House group, publisher of the new James Bond novel, Forever and a Day by Anthony Horowitz have priced the hardcover of the novel at £18.99, but there is no pricing details for the eBook on their website. However Amazon are selling the hardcover for £9.49, while the eBook comes in at £9.99. Why should the digital file cost more than a physical book? Publishers moaned that eBooks devauled the physical book, but isn't that just what they are doing here! Amazon have stated that the pricing is down to the publisher, which angers eBook fans who, maybe rightly, feel that the publishers are trying to drive the sales of the physical book at the expense of the eBook.

Of course this is publication week and the eBook is likely to be discounted over the coming weeks, but this price fixing does leave a nasty taste in the mouth. Whilst I don't believe the eBook should be priced stupidly low it should more in keeping with the price of a paperback. You are getting the same story with the eBook so both publishers and author should be compensated fairly, but when readers see the eBook priced so highly they just think, 'Rip Off.'

I collect the Bond books and I've already bought the hardcover, but I'll also pick up the eBook as I very rarely read fiction as a physical book. I'm so used to my Kindle that for fiction I find it a better experience. No searching for something to use as a bookmark, easier to carry around and once in the story you don't notice the delivery method. This also means that my hardcover will remain in mint condition.


Anyway courtesy of the publisher here is the first chapter of the new Bond book: