* Should I write an eBook (?) Forbes asks  in this interesting article looking at the options in modern publishing. 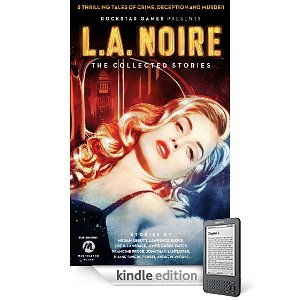 * Fancy some noir? Want it free?  An anthology of short stories written for and inspired by the fictionalised events of LA Noire will be available as a free download for a limited time on the iTunes Store in Australia. The collection of stories can be downloaded through iTunes, or on the iBooks app on iPhone, iPad and iPod touch. Also available through iTunes and the Amazon Kindle eBook store in the US and UK, and the Barnes & Noble eBook store in the US, the anthology comprises eight short stories inspired by LA Noire's depictions of Los Angeles' grimy 1940s crinimal underbelly. HERE DUDE
* Apple have announced that they have sold 130 million eBooks from its iBooks store. Full story
* Troubled book seller Borders are now pulling out of the eBook business and are handing over control to KOBO - FULL STORY
* Harry Potter's mum, J K Rowling seems to have had a change of heart regarding eBooks which she once called horrendous. J.K. Rowling, author of the famed Harry Potter series, was interviewed in this month’s edition of Words with Jam. There was no mention on when she plans to release the Harry Potter series as eBooks, but she did talk about the wonders of eBooks. In response to a question titled eBooks – Genesis or Nemesis?, she replied that she loved the smell and feel of a paper book, but there are times where eBooks are valuable. Like when they can add countless millions to the bank account, no doubt.
* It's not out till next year but already the autobiography of Steve Jobs is already a bestseller on Amazon on pre-orders alone.iSteve: The Book of Jobs" has been in the top 15 among the 100 best-selling books on Amazon for the past two days. Even further, the book has been the No. 1 best seller in three different categories: Business Professional's Biographies, Technology, and Biography & History
Posted by Gary Dobbs/Jack Martin at 02:12

Amazing how a computer game can be inspirational.