The Archive's been very quiet this week best rest assured things should now return to normal, and in place of last week's missing Sunday Comics this week will see a mammoth story, a full episode of Charlton Comics classic, The Many Ghosts of Doctor Graves written by none other than Keith Chapman AKA Chap O'Keefe. Keith's latest eBook, Misfit Lil Cheats the Hangrope will also be one of the titles championed in the next Wild West eMonday which takes place during the last weekend of July. We've got some great stuff coming this time - I can reveal that after the success of our short story, Melanie by Edward D Grainger, published here during the previous Wild West eMonday, we will have an all new Cash Laramie story. And this time out it's doubly special because Grainger's co-written the story with popular Black Horse Western author, Chuck Tyrell.

News of this and much more soon. 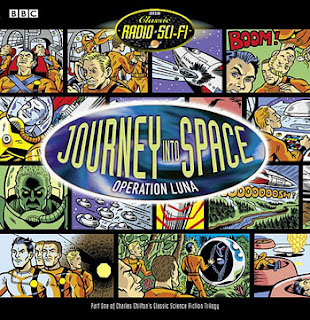 But for now I want to recommend the new BBC CD release, Journey into Space, which has just been released as a seven disc boxset. The series, first broadcast as part of the BBC Light Programme in 1952, is famous as being the last radio show to gain a bigger audience than the evening's television.The story here is  a rerecording of the original first series which was lost. This version was originally recorded in 1958 and titled, Operation Luna. It had originally been titled, Journey to the Moon.

The fact that there are any of these episodes left in the BBC Archive is a minor miracle, since they were believed to have been wiped shortly after broadcast. However, in 1986, a set of mis-named Transcription Service discs (produced for sale to overseas radio stations) were discovered, containing complete copies of the three original series). This discovery enabled the BBC to begin re-broadcasting the show in the late 1980s, and release copies of the show, first on audio cassette, and more recently on CD and Internet download. 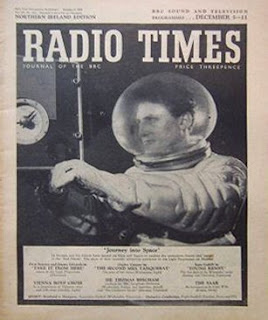 Listening to the series now it often seems a little corny, but that aside it still work beautifully, especially when our intrepid adventurers blast off to the moon - do not forget that when this was recorded there was still more than a decade to go before mankind actually reached the moon, or didn't depending on if you believe the conspiracy theories or not.


The sound quality is superb and given that they are over 50 years old this is quite remarkable. Journey into Space is a must have for anyone interested in SCI-FI or classic radio.
Posted by Gary Dobbs/Jack Martin at 10:52

Email ThisBlogThis!Share to TwitterShare to FacebookShare to Pinterest
Labels: Journey into space

One of the dubious benefits of age is that I can remember listening to this series when it was originally broadcast. If memory serves me correctly, I believe there was a frightening (but unfortunate) villain called "Whittaker" -- a member of the space crew whose mind had been taken over by unknown forces. It was all very creepy for a nine-year-old. The scriptwriter, Charles Chilton, had previously authored a popular western series, Riders of the Range.

By the way, the Misfit Lil Kindle ebook has now been joined by a couple more: Liberty and a Law Badge and The Sheriff and the Widow.

Did you ever read Hugh Walters' Journey to Jupiter etc., juvenile science fiction novels? They popped back into my head as I read this post - don't remember too much about them except that I devoured all the copies my library (Stamford Hill N. London) held when I was a kid back in the '60s. Happy days...