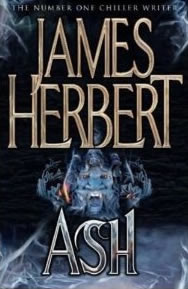 “What’s happening with horror author, James Herbert’s long awaited new novel, Ash? First it was listed for 2010, then 2011 and finally a publication date of Sept 2012 was set.” we asked in a previous post HERE, and whilst nothing has been confirmed one way or the other we have heard third hand that the official stance from the author’s publisher is that James Herbert is hard at work on his new novel.

However rumours that Mr Herbert is too ill to complete the book persist. James Herbert is a particular favourite of mine and is a true gentleman who personally answered each and every item of fan mail I’ve sent him over the years. Questions are being asked on Internet forums with 2000AD having a particularly active thread wondering what has happened to the new novel. One fan asked - Just been in Waterstones to ask when Ash will be in and they tell me the release date has been put back to Sept 2012!!! What is going on and why all the delays, does anyone have a proper answer? I bought the Ash sampler last year and the story sounds like it could be his best yet, government conspiracy theory, death of princess Diana etc, haunted mansion/secret government location. Or has he had to re-write the whole book and what I have will be no reflection of the released novel? Why haven’t the publishers put out a press release to advise what is going on?! ???


Whatever the reason for this it is deeply troubling. Herbert’s publisher are unable to offer any explanation and all I have to go on are the words of a writer friend who saw Herbert in London some time back – this writer, who once shared a publisher with Herbert, told me that Herbert looked terrible and needed help to walk. I do hope this turns out to be a case of writer’s block and nothing more serious.
Posted by Gary Dobbs/Jack Martin at 05:30

I hope he's OK. I like his work very much as well.

Me too. Love the guy.