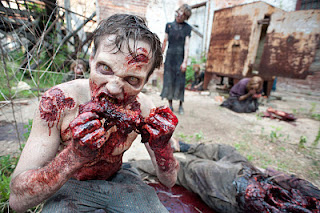 We've had four episodes now of the second season of AMC's Walking Dead and whilst it remains watchable it is deeply disappointing - the first season was amazing and set up a believable world but only four episodes into the second season and much of the good work has already been undone. Rick is a different character, as is Shane but the biggest problems this season is the lack of logic. In the first season we discovered that the undead, or Walkers as they are called here, can detect the living by smell which was why Rick and Glenn plastered themselves with zombie innards and were able to walk amongst the dead in a particularly memorable if gruesome scene, but this season the undead seemed to have lost the sense of smell and our heroes are able to evade them by hiding beneath cars and keeping quiet. That's not the only problem though and the storyline where Sophia went missing was bizarre - why would Rick tell her to run off rather than simply hide while he dispatched the zombie on their trail?


The fourth episode ended by revealing that Rick's wife was pregnant with Shane's baby which should set up some interesting events for future episodes. It's such a pity though that the series seems to have run out of steam and AMC may seriously regret sacking Frank Darabont as show runner. If the ratings drop and the show fizzles out then the blame can only be laid in one place - the the feet of AMC themselves.