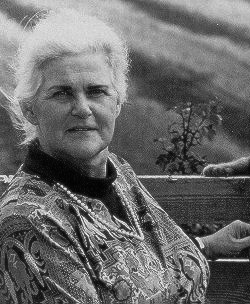 Anne McCaffrey, the first woman to win the Nebula Award has passed away.

Tor. com reports: Anne McCaffrey, legendary SF and fantasy author best known for her Dragonriders of Pern series, has passed away. Random House has confirmed that McCaffrey died of a stroke at her home in Ireland on Monday, November 21. The initial word arrived through author Alan Baxter reporting on behalf of Trent Zelazny.

McCaffrey leaves behind a tremendous legacy. She was active in the science fiction and fantasy fields right up to her passing and will be greatly missed.
Tributes to Anne McCaffrey are starting to appear in the online SFF community.

"I think the best story I ever wrote was 'The Ship Who Sang'. It still causes people to cry, including me. When Todd and I were reading it at Brighton, they had a BBC crew filming it. So there were these BBC cameramen hunkered down filming us, and comes the end of the story (which Todd always reads, because I can't go through it without weeping), I saw that these cameramen had tears rolling down their faces. That's such a thrill — a story I wrote at the beginning of my career, and it's still packin' the house. I wrote that story because I couldn't tell my father, he died in 1953. I remember reading a story — I can't remember the name or that of the author — about a woman searching for her son's brain, it had been used for an autopilot on an ore ship and she wanted to find it and give it surcease. And I thought what if severely disabled people were given a chance to become starships? What if they wanted to do that? I thought, 'Hey, that would be a gorgeous idea.' So that's how 'The Ship Who Sang' was born." Anne McCaffrey

Posted by Gary Dobbs/Jack Martin at 01:38

Anne McCaffrey, the Dragon Lady of Pern, Has Passed On. I remember reading Dragonquest in third grade, I'd picked the book up because the cover looked cool. By the time I'd finished the first page I was hooked. I sat on top of the beehive out behind the house with my pocket dictionary from sun-up to sun-down for a week and a half (I didn't read very fast in third grade) frequently stopping to look at the cover and imagine it was me soaring on the back of a Dragon fighting thread. Anne McCaffrey instilled in me a liflelong love of reading and the hope that somewhere maybe there really are Ships That Sing and Dragons really are watching over us. Rest in Peace Ms. McCaffrey.