It's Full Stream Ahead 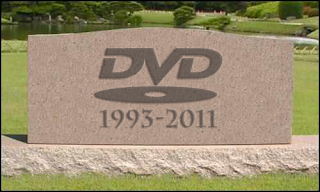 When the DVD format first hit the market a major selling point besides the improved picture and audio were the special features that could be crammed onto a disc, but these days special features seem to be vanishing. Check out the insightful article HERE on this very subject.


” I lucked out with the timing when I was in film school; I was there from 1998-2002, aka the glory years of DVD special editions. Nearly every movie had a commentary, and I swear I learned more from those than I did in any of my classes.”

The author of the article is quite correct and these days all but the biggest of titles seem bereft of special features, but far from seeing the death of special features we may be witnessing the death of DVD itself. Industry insiders believe that CD’s have another year or two left in them and that DVD’s have no more than five years. And the much trumpeted blu-ray format has not been the success that the industry wished for with movie fans being slow to adopt the new format. I myself consider myself a film buff and have well over a thousand titles in my DVD collection and  I haven’t opted for blu-ray because…well, because I don’t see the point. The audio and visual capabilities of a standard DVD are good enough to make blu-ray a wet fish.

It used to be that the industry were afraid of downloads but they seem much more comfortable  now, perhaps seeing a bigger profit to be made. According to the Wall Street jounal, the big shots have wanted DVD to die for quite some time, as it would be cheaper to sell movies over the net. But nobody wants to watch movies on their computer…or do they? BTIG Research analyst Richard Greenfield notes that Google searches for rental services such as Redbox and (especially) Netflix have skyrocketed and searches for DVDs have flat-lined. Searches for DVD terms such as “DVDs,” “movies on DVD,” “new DVD releases,” and “top DVD rentals” were off some 45 percent since their late-2008 peak, according to Google data. Contrast this with “Netflix,” whose query growth has eclipsed 90 percent in each of the past two years. Has the term Netflix become synonymous with home video, as Google has with search?

It would seem that Hollywood have turned their back on DVD and are now looking at streaming movies over the net.
Posted by Gary Dobbs/Jack Martin at 01:41

Email ThisBlogThis!Share to TwitterShare to FacebookShare to Pinterest
Labels: DVD