Sherlock Holmes and The Voice of Terror (1943) 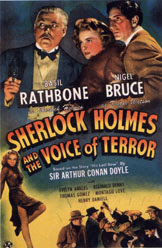 DVD really does justice to old black and white movies and Sherlock Holmes and the Voice of Terror, available both as a single disc and as part of a box set, has been remastered to provide crystal clear black and white images and punchy sound. This was the third time that Basil Rathbone and Nigel Bruce had been paired as Holmes and Watson but was actually the first in the Universal Pictures Holmes series. The previous two movies had been made by Fox and were set in the late Victorian era, while the Universal series brought Holmes into the current day in order to fight the Nazi menace as well as provide a moral boosting speech during the close of the movie, which had movie audiences of the day applauding from their seats.

Much of the criticism of this Holmes series centres on the fact that Nigel Bruce played Watson as a bumbling fool, but in all fairness Bruce's portrayal is the perfect counterpoint to Rathbone's intense Sherlock Holmes. The chemistry between the two is remarkable and each manages to compliment the other. True there are moments when Watson's only purpose seems to be to provide comic relief but all the same the pairing of Rathbone and Bruce is one of cinema's great double acts. For many people Rathbone and Bruce are Holmes and Watson. 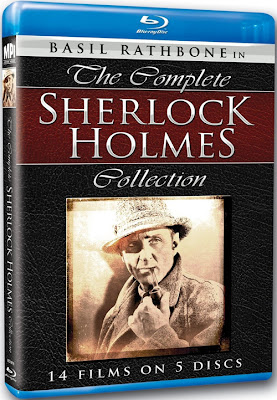 The movie made during the early days of the second world war involves a Lord Haw Haw like traitor who is broadcasting from Germany to the UK, who is working with a group of saboteurs who are striking deep in the British mainland. Holmes is brought into the case by the British government and right away we are aware there is a traitor within the war department, but we are fed a red herring meal so that the character we thought was the traitor is completely innocent, and it is he we least expect who turns out to actually be the fifth column.

I'm far from a Sherlock Holmes expert but I have read all of the canon, and it was Rathbone and Bruce who first got me interested in the characters. When I was growing up the movies were regularly shown on BBC2 early in the evening and watching these led me to seek out the original stories, so I was always have a place in my heart for this particular Holmes and Watson.

Voice of Terror is a great film and even although it was produced in the fashion of a B movie it looks superb with effective photography and an almost noirish atmosphere. And despite the changes to the Watson character, Rathbone and Bruce rank among the truly great celluloid  versions of Sherlock Holmes and Dr Watson.

Email ThisBlogThis!Share to TwitterShare to FacebookShare to Pinterest
Labels: sherlock holmes, the voice of terror

I have a great liking for Rathbone's Holmes. His physical resemblance to Holmes, combined with his baritone and mischievous eyes makes him a near perfect Holmes...

It is quite unfortunate that his Holmes is paired up with this particular version of Watson.

While it can be argued that Watson being such a fool makes Holmes look that much smarter and of course both of them share an excellent on-screen chemistry, I cannot help wondering that had Bruce’s Watson had been in tune with the canon, Rathbone-Bruce would have been the Definitive version !

I think that Bruce's Watson, while not faithful to the character Doyle wrote, is a part of the reason that Rathbone shone so well in the role. The comedy was of its time and I can watch these two all day long. Though I must of course concur that the Watson of the written word was nothing like this version. I do however love this team.

I agree that Rathbone, like Jeremy Brett, had the physical look of all the Strand illustrations and for all the liberties taken with Doyle's work, he will always remain among the top screen Holmes.

You're last point is an interesting one to ponder, and I think you are correct and that if Bruce's Watson was more like Doyle's the these two may have been the definitive screen versions. Bruce's Watson's often feels like a foolish uncle to Holmes' wayward genius.

All the same - I love these two

Buddy2 - I think we are playing the game, that is treating Holmes as if he were real. And it's great fun to do so but on a purely entertainment basis Rathbone and Bruce were excellent. You know a little story which is nothing to do with this thread but I find it amusing - I was in the Sherlock Holmes museum in Baker Street a few years ago and they have an actor there dressed up like Holmes. Everything about him is authentic but when I was there, his mobile rang and he pulled it out from his cape - spoiled the illusion I can tell you.

I agree with you about modern gadgets not working well with our conception of Sherlock Holmes.

That is one reason I am unable to reconcile the latest incarnation of Sherlock (Benedict Cumberbatch) with all the texting, blogging and what not!

Speaking of the Sherlock Holmes museum, it is my long time dream to visit the same. I have read that the picture of Vasily Livanov is the biggest in a room that has pictures of the various actors portraying Sherlock Holmes. As a long time fan of Livanov, I hope this is true.Can you please confirm this..

I must say I think the nbc's new Sherlock is a triumph- I initially didn't like the idea of a moderr setting but it works so well. Sorry about the typos- using my phone. Gary