A jOURNEY TOO FAR 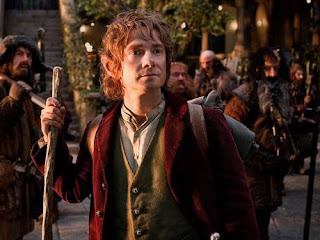 I can't believe how boring Peter Jackson's The Hobbit is - I'm a huge fan of his Lord of the Rings trilogy but in stretching out Tolkein's Hobbit into three movies the lack of story is plainly evident. It takes almost half an hour to get out of Bilbo's home and too many lesser characters are given too much screen time - I really don't need twenty minutes spent on characters who have nothing much to do with the main storyline. There was also the problem with the 48 frames per second which makes the entire thing look like it was shot on videotape - I don't think this is the case of us having to get used to the new technology but rather that this is bad technology, and characters often seemed to be moving in speeded up motion.

There are good points - Martin Freeman is excellent as Bilbo and Ian McKellen really brings Gandalf to life, but in trying to no doubt bring in three times the profit by making three films instead of one, the integrity of the story's been ruined.

And I was so looking forward to this movie...ah well, maybe next time.

Posted by Gary Dobbs/Jack Martin at 15:02

Email ThisBlogThis!Share to TwitterShare to FacebookShare to Pinterest
Labels: the hobbit

Quite a number of other bloggers and reviewers have expressed similar opinions about the movie. I am guessing Peter Jackson was more intent on milking the cash cow this time...