Sir Paul McCartney has fulfilled a "personal ambition" by being immortalised in The Dandy.
The former Beatle will appear alongside Desperate Dan in the last-ever print edition, which goes on sale tomorrow.

According to publishers DC Thomson, Sir Paul got in touch after they announced the end of the comic in August.

He wrote: "In 1963, in the NME, when asked what my personal ambition was, I replied - to have my picture in The Dandy! I hope it's not too late!"

"The Dandy was a favourite comic of mine when growing up in Liverpool and each week I would look forward to the exploits of Desperate Dan and his other comic book colleagues."

Sir Paul will be seen grimacing as Desperate Dan, unaware of the strength of his formidable handshake, crushes the bass player's fingers (thankfully the ones on his right hand - Sir Paul plays a left-handed guitar). 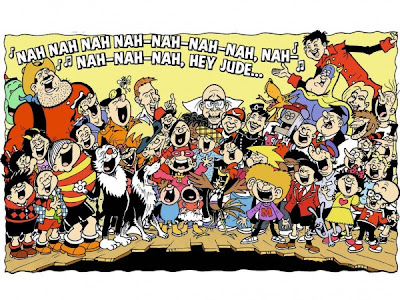 He then leads 50 of the comic's most famous characters in a sing-along version of Hey Jude.

Email ThisBlogThis!Share to TwitterShare to FacebookShare to Pinterest
Labels: paul mccartney, the dandy

Times have certainly changed. I was one of the 2 million plus who happily paid their tuppence a week in 1950 to be entertained by the Dandy: Desperate Dan, Korky, Keyhole Kate, Hungry Horace, Black Bob, Lion Boy, and -- horror, how un-PC! -- Bongo the Boy from the Congo. None of those comics, once so much enjoyed, is still in my possession today. All I have is a pristine copy of the first-ever Dandy-Beano Summer Special 1963, which was bought by me out of professional interest as a young editor involved at that time in the comics business. Apparently one copy of this comic (said by dealers to be "fast becoming one of the Holy Grails of British comics") has sold on eBay for £1,340. Anybody willing to pay anything similar is welcome to make contact!

Keith - nice to see you commenting here. Have missed your input - where the hell you been?