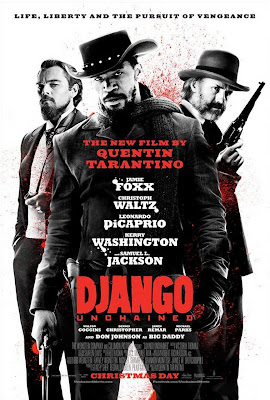 The first reviews of the movie have been uniformly positive with the film currently sporting a 100% rating on Rotten Tomatoes.

Move over the Avengers, piss of Dark Knight and vamoose you Hobbit critters, there is only one film that matters this year and that is - Tarantino's Django Unchained.

"Quentin Tarantino's brilliant and brutal revenge western is a wildly exciting return to form: a thrilling adventure in genre and style climaxing in a bizarre and nightmarish scenario in a slave plantation in 1858. The movie is managed with Tarantino's superb provocation and audacity, with a whiplash of cruelty and swagger of scorn. It is superbly acted by Christoph Waltz, Jamie Foxx, Kerry Washington, Leonardo DiCaprio and, particularly, Samuel L Jackson, who creates a masterpiece with his chilling character Stephen, the grey, stooping servant-elder to DiCaprio's unspeakable slave-owner Calvin Candie." The Guardian 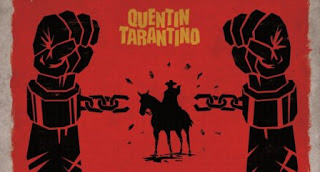 "Applying the episodic format and visual template of classic and spaghetti Westerns to a revenge saga mostly set in the Deep South just before the Civil War, the film makes a point of pushing the savagery of slavery to the forefront but does so in a way that rather amazingly dovetails with the heightened historical, stylistic and comic sensibilities at play. The anecdotal, odyssey-like structure of this long, talky saga could be considered indulgent, but Tarantino injects the weighty material with so many jocular, startling and unexpected touches that it’s constantly stimulating. A stellar cast and strong action and comedy elements will attract a good-sized audience internationally, though distaste for the subject matter and the irreverent take on a tragic subject might make some prospective viewers hesitate." Hollywood Reporter

Posted by Gary Dobbs/Jack Martin at 03:58

Email ThisBlogThis!Share to TwitterShare to FacebookShare to Pinterest
Labels: countdown to django unchained