Fifty Years in Time and Space 29: The Yeti

Doctor who: The Abominable Snowman 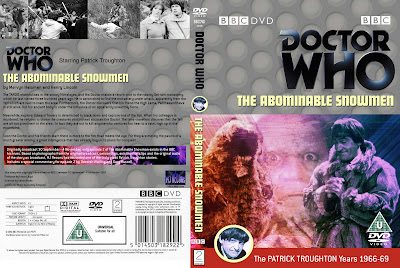 Doctor Who has a fervent fanbase and the BBC obviously know this - what we have here is a DVD release of a six part Doctor Who story in which only the second episode exists. The other five are missing from the archives and believed to have been junked - Wiping or junking is a colloquial term for action taken by radio and television production and broadcasting companies, in which old audiotapes, videotapes, and telerecordings (kinescopes), are erased, reused, or destroyed after several uses. The practice was prevalent during the 1960s and 1970s, although it is now less common since associated storage costs have decreased, and especially since the advent of domestic audiovisual playback technology (e.g. videocassette and DVD), with broadcasters and production houses realizing both the economic and cultural value of keeping archived material for both rebroadcast and potential profits through release on home video. 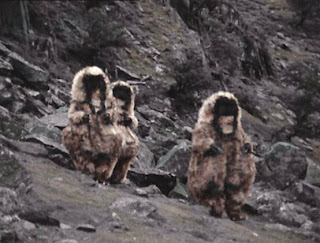 What the BBC have done in order to put this DVD onto the market is provide the missing five episodes as soundtracks, with existing stills and an all new narration. The second episode is of course show in a remastered form. It makes for a strange viewing experience and to my mind the BBC are being brazen in releasing it as a full price release, however I suppose it has historical worth particularly to fans of the show and TV historians.

It's a pity that the only surviving episode is one of the less action packed ones, but at the same time it's always great to see Pat Troughton in action - Troughton was a little before my time - Jon Pertwee was the Doctor when I was a kid - but since discovering Troughton via old reruns he has become my favourite. Everything about his scruffy little man with a Beatle-haircut image was great. The yetis do appear in this episode - looking like drunken Wombles they amble about the mountains trying to appear deadly - still, they must have looked awesome to the pre CGI generation with their tiny black and white TV sets.
Posted by Gary Dobbs/Jack Martin at 02:58

Email ThisBlogThis!Share to TwitterShare to FacebookShare to Pinterest
Labels: fifty years in time and space