DICK BARTON AND THE CABATOLIN DIAMONDS 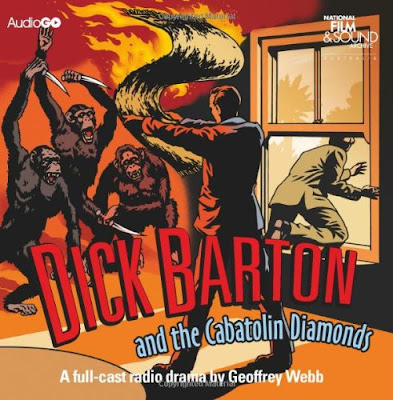 I'm a huge fan of radio and the possibilities it offers for drama and comedy - BBC Radio 4 Extra (formally Radio 7) is my favourite station and I'm always buying Old Time Radio CD's and discovering, often for the first time, shows that took to the airwaves before I was even a twinkle in my father's eye. Dick Barton for instance was well before my time and apart from the short lived TV revival in the late 70's my only exposure was via the classic radio episodes that were broadcast from time to time. Dick Barton - Special Agent was a popular radio programme on the BBC Light Programme which was the BBC's first daily serial. Between 1946 to 1951 it aired at 6.45 each weekday evening and at its peak it had an audience of 15 million listeners.

Incredible to think that a radio show could attract such a vast audience. 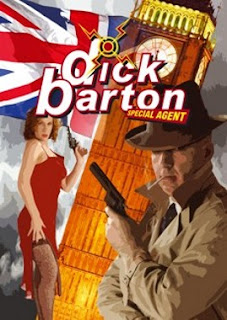 I was eager to get my hands on this CD release from  AudioGO - Douglas Kelly stars as 'Dick Barton - Special Agent' in another thrilling adventure for radio's greatest hero. Heralded by an instantly memorable signature tune, the adventures of special agent Dick Barton and his friends Jock and Snowey, were essential listening for an entire generation. Originally starring Noel Johnson, Duncan Carse and Gordon Davies, in an exciting world of criminal masterminds, espionage and adventure, it ran on the BBC Light Programme between 1946 and 1951. Sadly very few original recordings still survive. However, in 1949 a number of early Barton tales were re-recorded for transmission overseas. Starring Douglas Kelly, these re-stagings found new audiences in Australia, New Zealand and South Africa. These recordings were rediscovered in the National Film and Sound Archive of Australia in 2009 and allow listeners to finally relive the escapades of the great Dick Barton. In this recording from Spring 1949, Dick's plans for a Mediterranean cruise are cancelled, when the Home Office ask him to help them crack a gang of international diamond smugglers. Can Dick thwart the evil Henri De Flambeau, before it's too late? Find out in "Dick Barton - Special Agent!"

Although these are archive recordings they are mostly pristine throughout and the adventure is in the best boy's own style. Great stuff.
Posted by Gary Dobbs/Jack Martin at 15:36

In the late 1940s, an early incarnation of Hammer Films made three Dick Barton films starring Don Stannard (who sadly died in a car crash in 1949). In those days, although every home had a radio set (or rather a "wireless") not so many had televisions. As a boy, I had a set of 35mm clips, I think from from one of the Stannard Barton films, made for a gadget called a "film stip viewer". This was made of red and white rubber and had a magnifying lens at one end. You popped one of your film clips into the viewer, held it towards a light source (e.g. a window), closed one eye and peered with the other eye through the lens to see your exciting movie scene (or recent news event or whatever) in a kind of simulation of a cinema experience. Too weird for description, isn't it? But film stips were very popular for a while. (If you want to know more, there's a filmstips.com website.)