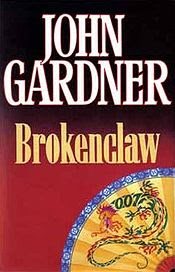 After completing the novelization of the film, Licence to Kill, John Gardner returned to his Bond series proper with his tenth book in the series.

The book neatly dovetails with Win, Lose of Die and after expressing frustration over a lack of action after his year-long mission with the Royal Navy , Bond threatens to resign.  M however orders Bond to take a vacation and so  Bond travels to Victoria, British Columbia where he is intrigued by Lee Fu-Chu, a half-Blackfoot, half-Chinese philanthropist who is known as "Brokenclaw" because of a deformed hand.

This book was something of a disappointment and Gardner risked alienating long time fans of Fleming's books by having Bond become a tea drinker - Fleming had long established that Bond hated tea. It  may only be a small aspect of Bond's character but it annoys readers who know the series well. Gardner himself often listed this as the least favourite of his Bond novels. The writing doesn't seem to hold the usual vigour which often made the Gardner books so entertaining. Maybe the fact that the author was recovering from prostrate cancer while writing the book has something to do with it not being up to the usual standard. 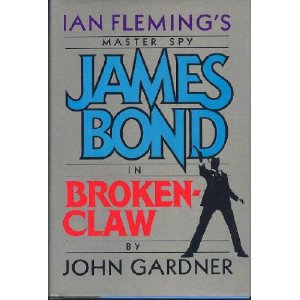 For a Bond novel the narrative is very slowly paced and for much of the book nothing seems to be happening. The climatic battle between Bond and Brokenclaw, with bows and arrows of all things, also falls flat.

John Gardner wasn't quite himself when writing this book and through no fault of his own, it shows in the finished product. If you've never read a Gardner Bond before then this is not the one to start with - it's got some redeeming qualities but these are few and far between. Still the author wasn't quite finished with 007 yet and there was still some good stuff to come.

Next - The Man from Barbarossa in which both John Gardner and James Bond returned to form.
Posted by Gary Dobbs/Jack Martin at 18:11