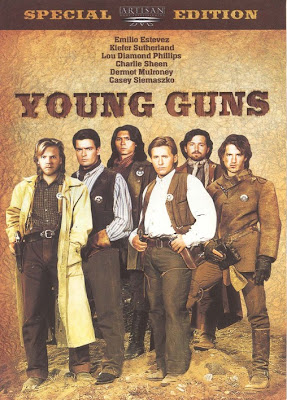 It's been years since I've watched this film, but in the mood for some stylised western mayhem, and a smidgen of Charlie Sheen, I slipped the disc into my DVD player.

You know this is the film where Charlie Sheen is the level headed one and his younger bro is Billy the Kid. These days the tables have been turned, and it is Charlie who is the hellraiser - mind you, I love this guy. As he points out in his Twitter status - born small, now huge...winning.

But, I've gone off on a tangent, so back to the movie - this is the western for those weaned on the big action movies of the 80's and 90's. It's Die Hard with a Stetson, Lethal Weapon on the range, it's set in a west sound-tracked by synthesiser but above all it's bloody good fun, and that final shoot out, can't have a western without a final shoot out, is up there with those classic westerns. Of course most of us already know that the western has always been cool, but coolness oozes out of each and every frame of this movie. It really isn't a bad film - despite what some reviews would have you believe.

Firstly the film is not historically accurate but then if we ignored every western that took liberties with historical fact, we'd have only a fistful of movies to watch.

Young Guns was what we used to call, a high concept movie - cast the then popular group of actors known as The Brat Pack in a western and sit back and watch the big bucks roll in. And roll in they did- $44 million on its original cinema release and many times that since. In fact during its opening weekend it was the highest grossing movie and all from a limited budget of $13 million.

The picture belongs to Emlio Estevez with his psychotic reading of Billy the Kid, but Kiefer Sutherland and Lou Diamond Phillips are also excellent. The parts given to the rest of the brat pack are mostly supporting and Charlie Sheen does his best with his straight laced character but the character doesn't stand out in comparison to the more interesting roles given out to the other actors.

Old hands Terence Stamp and Jack Palance are on hand to give the film a touch of class, and Palance is especially effective as the sinister Lawrance Murphy. There scenes he shares with Keiffer Sutherland as the lovesick Doc are especially effective with Palance coming across as an almost vampiric figure.

The final scene is a voice over of Doc explaining what happened after the picture, a voice over that was contradicted in Young Guns II. In Doc's explanation, he includes that Alex's widow caused a congressional investigation into the Lincoln County War. Chavez took work at a farm in California; Doc moved east to New York and married Yen Sun, whom he had saved from Murphy; and Billy continued to ride until he was found and shot dead by Pat Garrett, who in this film is shown as barely knowing Billy. Billy was buried next to Charlie Bowdre at Fort Sumner. A stranger went to the grave of Billy the Kid late at night and made a carving into the headstone. The epitaph read only one word: "PALS".

It's got action, laughs and thrills - what more could one want?
Posted by Gary Dobbs/Jack Martin at 05:28

Email ThisBlogThis!Share to TwitterShare to FacebookShare to Pinterest
Labels: the young guns