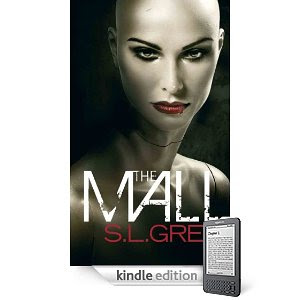 S. L. Grey, according the author bio is  “a mysterious, genderless figure”, but is actually the South African writers, Louis Greenberg and Sarah Lotz.

And for this excellent horror novel they each take on the duties of one character each, Dan and Rhoda, and tell the story  in alternating chapters from Dan’s and Rhoda’s perspectives.
Dan is a bored white man. He whiles away his shifts in a bookstore sneaking cigarettes and fantasising about a co-worker.Rhoda is a feisty black drug user who, babysitting a child for a couple of hours, heads out to the mall to score. However Rhoda loses her young charge,  and she and Dan’s very different worlds collide. Cue one of the cleverest, creepiest and most memorable horror novels for ages.

The pair’s journey takes them at first through the service corridors behind the plazas and then far deeper than they know makes sense, into the bowels of the glitzy, starkly-lit shopping centre.The authors ratchet up the dread with a series of set pieces that are at turns unsettling, tense and even gross. This is skilfully crafted horror, with not a vampire, werewolf or zombie in sight.

But it’s when Dan and Rhoda, urged on by a series of nerve-jangling text messages, emerge into what they think is the mall they left that Grey’s novel really comes into its own.This parallel universe is filled with stores stripped of their marketing sheen – a clothes outlet called Sweat Shop, a pharmacy named Medi-Sin and, most gruesomely, McColons – where staff are chained to their counters and shoppers rush around in fear of failing to consume satisfactorily.

My advice is to buy The Mall  immediately.  As many  others have already said, you’ll never look at a shop mannequin in the same way again. More importantly, though, after reading this book you’ll be counting the days until the next SL Grey novel.

Absolutely awesome – an original and genuinely scary horror thrill
at May 22, 2011