Book Review - A TIME FOR HANGING BY BILL CRIDER 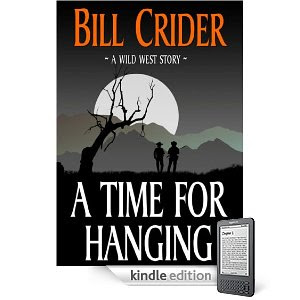 The mystery aspect of this novel is very well developed, as is the Old West setting. The book is populated by likable characters who ring true - the double act of Sheriff Ward Vincent and his deputy are an excellent team - neither of them are heroic characters but both can be counted on, often unbeknownst to themselves, to do the right thing.

The book starts off with young Peco Morales stumbling across the dead body of a young girl. The girl is Lizzie Randall, the preacher's daughter, and when the men out looking for her find the young Mexican boy close to her body, they jump to the inevitable conclusion. The men first beat the young boy within an inch of his life and they then want to hang the boy, but Deputy Jack Simkins stands up to them and holds off the lynching so the sheriff can be brought.


Sheriff Vincent knows that all the evidence is circumstantial and, as he feels guilt at the death of the Mexican boy's father some years back, a case he never fully investigated, he is determined to discover the truth before the boys faces the rope. Author Bill Crider is best known for his work in the mystery genre, and he brings all the skills developed over the years to this tale which is basically a traditional mystery in a western setting. That the Wild West town is created so effectively that the reader can almost smell the dusty streets, makes for a compelling read with both devious twists and traditional western thrills.

A Time For Hanging was previously available in print and the first electronic edition is published by Crossroad Press & Macabre Ink Digital. It's priced fairly, around the price the mass market paperback would have been back in the day. The Archive recommends the book to all western fans - a thoroughly enjoyable Wild West mystery.


Find it HERE
Posted by Gary Dobbs/Jack Martin at 05:54

Email ThisBlogThis!Share to TwitterShare to FacebookShare to Pinterest
Labels: a time for hanging, bill crider

Another of Bill's I can recommend is MEDICINE SHOW. I have another, RYAN RIDES BACK, but I haven;t read it yet. With Bill's track record, I think it would be safe to say it's good as well.