Hot Lead - The new journal of the wild west. 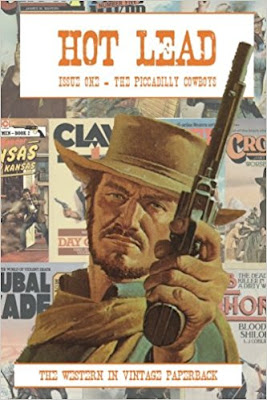 I've read a fair few fanzines in my time, contributed to many, but the one thing most of them have in common (apart from the enthusiasm for their subject matter) is the way they were  cheaply produced, often printed on A4 sheets and simply stabled together, with artwork poorly reproduced. Sometimes fanzine producers would splash out and produce a magazine in A5 format, but by and large  they still looked like a poor relation (even if the writing was sometimes superior)  to the professional magazines that dominated.

That ain't the case these days. And the premier issue of Hot Lead, the fanzine devoted to western fiction paperbacks, can stand up alongside any professional publication - excellently produced, using Amazon's own CreateSpace system, with artwork that is clean and vivid and words that are well edited and wonderfully written. Hot Lead then proves that there is little difference to what a group of enthusiastic fans can produce and the glossy magazines that fill the news-stands. Though in fairness Hot Lead does benefit from having Justin Marriott the man behind the excellent Paperback Fanatic in the editing chair.

The first issue comes in at a respectable 60+ pages and is dedicated to a group of western writers known collectivelly as The Piccadilly Cowboys. There is an interview with George G Gilman, the man responsible for the ever popular Edge western series, and regular readers of this blog will know that I am a huge fan of this series - indeed, I was responsible for bringing the first of the Edge books to the digital world of eBooks, before Malcolm Davy took over and has since brought virtually the entire series into digital print. Paul Bishop gives us an article that explains  the origins of the Piccadilly Cowboys, and Steve Mayall, a name well known to western fans, bring us the first of his regular review section, The Cowpoke Critic. These are just some of the highlights to this magazine which is  positively bursting with wild west goodies. 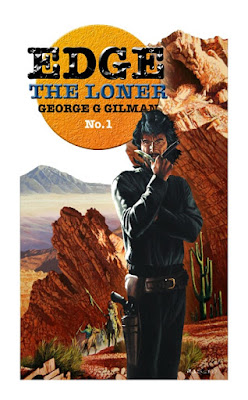 'Each issue of Hot Lead will have a theme running through it', explained co-editor Paul Bishop. 'Issue #2 will be Western cover art...Issue #3 will look at the Adult Westerns...#4 Western paperback series with women main characters...#5 current Western wordslingers from William W. Johnstone's and Ralph Compton's fiction factories to Ralph Cotton, Cotton Smith, and more (all of this is subject to change)...'

Me, as a  lifelong fan of the western genre can't wait for the second issue, nor those that are to follow and would like to stand both Justin Marriott and Paul Bishop a drink (a whiskey in a dirty glass) for producing my new favourite magazine. The best place to score a issue of this excellent publication is from Amazon and I do urge fans of the western genre to do so.
Posted by Gary Dobbs/Jack Martin at 12:45