Sean Penn's debut novel is a mess according to critics 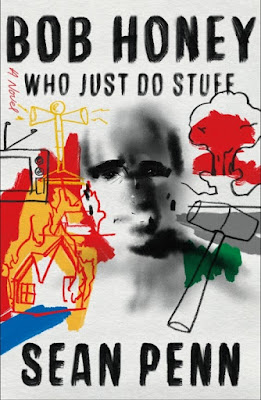 Sean Penn, actor and one time Madonna servicer, has written his first novel entitled, Bob Honey Who Just Do Stuff with polarizing results. Apparantly the book is about a hitman who works for US Intelligence, and the first reviews are hardly flattering.

The New York Times called  the book - 'a riddle wrapped in an enigma and cloaked in crazy' The reviewer also stated that he had to survive reading the book.

The Huffington Post said of the book - "It's physically impossible to dunk on a novel that is already dunking on itself so hard.

Apparantly the book  switches, without warning, between poetry and prose, while the epilogue contains an entire poem.

The author Salman Rushdie was one of the few to have good things to say about the book when he was quoted as saying, 'It was good fun to read.'

Here are some baffling sections from the book -

“Bob’s boyhood essence set him up for a separation from time, synergy, and social mores, leading him to acts of indelicacy, wounding words, and woeful whimsy that he himself would come to dread.” ― page 12


“Silly questions of cherries saved served to sever any last impression Bob might have had of Spurley as a serious citizen.” ― page 94


“There is pride to be had where the prejudicial is practiced with precision in the trenchant triage of tactile terminations.” ― page 125


US Today were undecided on the book and said - This literary debut is a mixed bag of nuts that are hard to crack. But once you dig in, you'll find some good stuff.

Posted by Gary Dobbs/Jack Martin at 16:25