ON MY eReader with Ben Bridges AKA David Whitehead

This is the first in a regular section in which the Archive quizzes writers about the contents of their eReaders. First up we have David Whitehead - 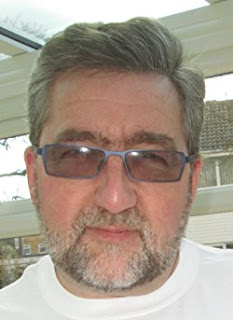 David Whitehead is a prolific English writer and arguably (hey, there's no argument about it) one of the most influential British western writers of the past thirty years. Born in London in 1958, he sold his first book, THE SILVER TRAIL, in 1984. It marked not only the first appearance of his popular continuing character, freelance fighting man Carter O'Brien, but also the first time he used his best-known pseudonym, Ben Bridges. Since then David has written more than seventy books; westerns as Ben Bridges, Glenn Lockwood, Matt Logan, Doug Thorne, Carter West and ten under his own name. In addition to this he writes romantic fiction as Janet Whitehead and has co-authored nine thrillers with Hollywood screenwriter Steve Hayes. David's entire back-catalogue is now available on Kindle, where all of his westerns are now being reissued under the Ben Bridges byline. For more details about David's work, please go to www.benbridges.co.uk.


Of course David is no stranger to the digital format and he is one of the men responsible for the wonderful Piccadilly Publishing House, a digital publisher that has for several years been bringing new and classic adventure fiction into digital print. Find them HERE but be warned, take a few pennies because while you are there you will buy.


OK so - So Drum Roll please.
and it's over to David Whitehead:

Last night I finished reading WAR CLOUD’S BRIDE by Sundown McCabe, whose real name is Roger Norris-Green. I’ve always been a sucker for Australia’s Cleveland westerns and now that they’ve finally started appearing in digital form, I’ve started getting enthusiastic about them all over again. 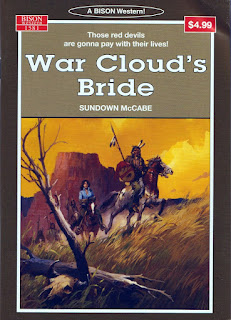 WAR CLOUD’S BRIDE tells the story of a drifter named Steve Brand, who gets involved in a manhunt – or more accurately a woman-hunt – when rancher’s daughter Alison Carter is abducted by a Cheyenne war party. But there’s more to the story than just that, of course. Long-buried secrets come to light as the pursuit unfolds, and the plot climaxes with a thrilling river-chase and of course, the obligatory final reckoning with the bad guys.

Overall, this is a fast-moving western, and certainly among the best Cleveland westerns I’ve read in a while (my favourite still remains BELFREY JUAREZ by Clint McCall – check it out if you can find a copy). Characterisation is sketchy but adequate and the author builds a neat sense of location. I doubt the wisdom of naming one character Brand and another one the very similar Brandy, but that’s only a minor technical quibble. WAR CLOUD’S BRIDE is well worth reading and I’m glad to see more Sundown McCabe titles finding a new readership in digital print.

Posted by Gary Dobbs/Jack Martin at 05:30