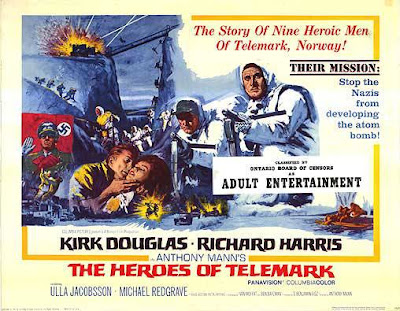 A large screen TV, a good sound system and a pristine cut on DVD - add a bottle of scotch and a cheese board and you've got all the ingredients for a truly cinematic experience in the home.

I watch a lot of old movies like this and so I thought it would be a good idea to add a VINTAGE MOVIE REVIEW section to the Archive, where titles would not be categorised by genre but rather included because they are what we would define as vintage. And you know, by and large, the old movies are usually the best - well, they are in the opinion of this grouchy old timer. You can stick your expensive CGI where the sun don't shine and muscle bound fools in latex merely bore me. Give me a slice of classic celluloid and I'm happy.

The Heroes of Telemark, filmed all the way back in 1965 (the year the Beatles released Help, cigarette advertising was banned on Television, Ian Fleming posthumously published The Man with the Golden Gun and I was born.) and takes its story from factual events.Namely the sabotaging by the Norwegian resistance of the German heavy water plants. These actions may have actually cost Germany the war, since prior to this audacious act of sabotage the Germans were closer than both the Americans and the British to producing a workable nuclear bomb. The story was also filmed in 1948 under the title   Kampen om tungtvannet, and that Franco/Norwegian version even featured four of the original commandos who took part in the actual sabotage playing themselves - that movie is available on You Tube and is embedded below. There is also a newspaper article HERE that tells of the death in 2012 of one of the last surviving saboteurs.


Kampen om tungtvannet The movie as available on You Tube 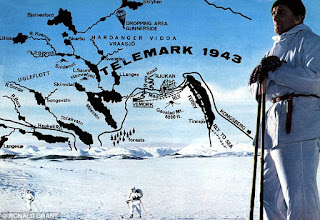 Anthony Mann's movie is quite faithful to actual events, but the veteran director of many classic westerns, is at all times aware that he is producing an entertainment and he delivers a spectacular movie, excellently paced and full of excitement. Reviews at the time said the characters were wooden but I can't agree with that and whilst Kirk Douglas may come across as a cross between Indiana Jones and James Bond, Richard Harris' Nazi hating character is superbly nuanced.

The action scenes are excellent and the ski chase in the movie is as good as anything seen on the big screen, the suspense is also ramped up and the end scene in which Douglas tries to save a group of children from a ferry that is about to blow up is a master-class in edge-of-the-seat viewing.

If you enjoy movies like Where Eagles Dare and the Guns of Navarone, then you will certainly enjoy Heroes of Telemark. Highly recommended.